An Interview with Brian Holers, Author of Doxology

So much of the focus of this book seems to be on finding one's way back home. Is this an updated version, in some sense, of the biblical story of the prodigal son?


First of all, I appreciate the elevated comparison. I only hope Doxology can carry a fraction of the messages of hope and redemption found in the Holy Bible. Readers will experience a certain amount of biblical imagery in this book, not really put together in any particular order. It just permeates the story. I’d be flat-out lying if I said I planned it that way. That’s just the story that came out. Not quickly, I’d like to add. I worked and worked to craft this story, for over 3 years.
I do see the similarities between Scooter’s story, and that of the prodigal son. When he returns from a long time away, his father even refers to him as such. However, in the biblical story, a father gives his younger son a share of what he would one day inherit, and the son runs away to waste it on wine, women and song, only to return when he is dead broke and starving. Scooter, conversely, leaves home with nothing and doesn’t really want to return. He likes his new life, as undignified as it may appear. But he does have similarities to the prodigal son—he’s lost, aimless, doesn’t appreciate what he has. So it’s an updated version of the story, I guess.

Your characters are very complex and become very real to the reader. How did you find them? Were they based on folks you know?

I guess I just found them in my head. I honestly have no idea where this story came from. All I had when I started was a mental picture of an older man and a younger man, uncle and nephew, waiting in line to get some food in the basement of a church. The nephew, in this picture, had just returned to his hometown for his father’s funeral, after many years away. The uncle was helping him find a piece of himself he thought he had left behind when he left that small town, and had never been back. Other than a couple of night classes at the local university, I have no training in writing. I just happened to have some time—I had sold a business and didn’t have to work too hard for awhile—and I started spending hours and hours and hours of it crafting the story in Doxology. No character is based on anyone I know, but some readers tell me they recognize someone from their family, their hometown.


One of the things I really liked about Doxology is you managed to give small glimpses of the underlying problems, creating an emotional connection for the reader, in spite of never really showing us what happened. It would seem that's a difficult thing to do; many authors never pull it off. Any tips for aspiring authors?

Well thank you for the compliment. The two most important ingredients I needed were time and discipline. Over the course of a dozen drafts, the book gained more and more depth, but it was important to me it not become too long. I ended up with an 80,000 word book but probably wrote 300,000. Who’s going to read a thousand page book by a guy they’ve never heard of? Shorter is often better, anyway, Writing a novel is like cooking a gumbo, it keeps getting further and further distilled, constantly thicker and richer, and like an especially long poem, you just keep getting rid of words you don’t really need. Lots of readers like to do the work of filling in all the blanks. Also, the greatest thing I did, and this doesn’t come free, is pay a professional editor to read for me during the development of the book. I strongly advise this. It costs money, yes, but the advice is a lot better than what you’ll get from your friends or from a reading group.


Are there more stories to be told with these characters? Specifically, do we ever find out if Scooter makes it back? Or is he simply used for contrast to show that some folks never get there.

Scooter would be a good subject for another novel. Whatever he looks like from the outside, he has made a place for himself, and is relatively happy there. It seems he never gets anywhere in his life, and maybe he doesn’t, but some people don’t. Still, it’s hard not to like him. I don’t have any plans to return to him, at this time. I am two drafts into novel number 2, and number 3 is boiling. I have a feeling Doxology will be the only story told about Jody, Vernon and Scooter. If so, I will miss them. But I won’t be surprised if some of the minor characters show up again. I had to cut one of the minor characters in the final draft (her name is Mawmaw), but she immediately made a place for herself in Miracle Run, my second book.


As I recall, the word doxology only appears once in the book near the end. Why did you choose that for the title?


A doxology is a short hymn of praise. I mentioned earlier that all I had when I started was the image of the two men waiting in line at the church. Actually, there is one more thing I had. A feeling. The feeling that permeated the story, from the earliest stages, was a sense of gratitude. I didn’t want to write a religious story per se, I just wanted to write a story about people who feel about life the way I do. They have struggled. They have loved and lost. Still, they recognize something much greater than they are, something well beyond understanding, is looking over them, and they are grateful. So the story wasn’t supposed to be about church or religion, it was supposed to be about people struggling through life, as we all do, and recognizing, at times begrudgingly, the presence of something greater. 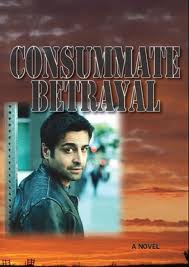 Sometimes you run across something the government has done that just doesn't sit right, while other times it does stuff that downright scares you. It is at times like that you might wonder if you are being paranoid or do others see it the way you do.  You know all about the 'conspiracy' theorists, who see danger behind every piece of legislation but that is not who you want to judge your concerns against. After all, those people would find malice if the government said Venus is a planet or liquid water is wet. No, you want to know if what you fear is what a 'normal' person might fear.  Then along comes a book that addresses your fear. Consummate Betrayal is just such a book. But the government policy is not the main course of the book, rather it is the plate holding the main course.  And as the hero of the book meets his fate at the hands of the FBI and the CIA, the reader gets an inkling of the danger some government policies and legislation present.

Read more »
Posted by Sunday Smith No comments: Links to this post