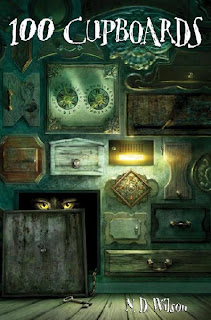 From Amazon:
Twelve-year-old Henry York wakes up one night to find bits of plaster in his hair. Two knobs have broken through the wall above his bed and one of them is slowly turning . . .Henry scrapes the plaster off the wall and discovers cupboards of all different sizes and shapes. Through one he can hear the sound of falling rain. Through another he sees a glowing room–with a man pacing back and forth! Henry soon understands that these are not just cupboards, but portals to other worlds.

100 Cupboards is the first book of a new fantasy adventure, written in the best world-hopping tradition and reinvented in N. D. Wilson’s inimitable style.

About the book:
Henry has come to live with his Uncle Frank, Aunt Dotty, and  his three cousins when his parents are taken hostage in Colombia.  He really doesn't know these people and it takes him back a little.  His parents have always been extra protective of Henry but his uncle and aunt are so much different, even letting his ride in the back of their pickup.
When Henry get to his new home, he finds himself on a farm, a place unfamiliar in many ways. His bedroom is in the attic, where his three cousins corner Henry to get to know him better. Henrietta, his middle cousin takes to Henry right away, although Henry is a little unsure of her and everything else.
Late at night he hears noises coming from behind his wall which has been covered over. Eventually, trying to find the source of the noises, he uncovers a wall containing cupboard doors. Henrietta catches on to him and  becomes his partner in crime as they discover not only that there are worlds on the other side of the cupboards but also as they explore those new worlds. Only trouble is, they release an evil witch into their own world!

My take:
I loved the cousins in this book.  Henrietta is inquisitive and daring. Anastasia is cute and funny. Penny is just straightforward and practical.  They remind me of my nieces! Henry is tumbled into a world he is just not ready for having been so protected by his parents.
The story itself is a little involved, looping between the cupboards and looping between cupboards and 'real life'.  At times I wondered why we learned about some of the places Henry and Henrietta explored because it seemed to be off track from the story. Little did I know there was so much more to the story than just this first book!
The worlds the kids explore are exotic at times and Wilson does such a good job of describing them that I could almost smell what Henry smelt and feel what Henry felt, from the spongy moss to the crumbling rock wall. Even the weird ballroom came through clear in my mind. Authors often have a hard time presenting descriptions of exotic places clear enough that the reader can see it as if they were there.  Wilson has no problem with this.
I was constantly wondering what was behind each door. And all through the book, I was wondering, just what is Aunt Dotty and Uncle Frank really hiding.