The Fate of the World 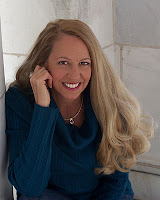 Today we have an interview with award winning author, Michele Poague. Her new trilogy, the Healing Crystal, now has Heir to Power book one and Fall of Eden book two currently on sale. Ransom book three will be available in early 2012.

How did the story come about?  I have always loved reading. When I read the Dragonriders of Pern, Anne McCaffrey made writing look easy. It wasn't. One morning in the early 80's, I pictured this young woman with long white hair and I knew where she lived. She carried a palm-sized crystal and I knew what it was, and what the story was going to be about, but in the 80's and 90's I didn't have time to write the story.


I never gave up on the idea and I started to write the story several times only to give up and put it away. In 1991 I took a short trip to the mid-west to research the area I believed Kairma and her family lived and the story began to unfold in ernest. The characters told me where the story took place. When I looked up at that great, carved mountain, I asked myself what a stranger to our world might think. From there, the entire religious and political philosophy of Survin took shape. The research of the area added depth realism. Although I enjoy fantasy, this is not fantasy, so the setting had to be realistic. The tunnels were one of the things that brought the story to life, but the monument south of Keystone played into the story with such perfection that I believed this future could really happen.


Another ten years passed, but the idea of The Healing Crystal never left me. I kept waiting for Connie Willis to write it. I thought this story was right up her alley, and I really wanted to know what was going to happen to the Crystal. Granted, I never told her this, but I kept checking the bookstores just in case.

Actually, I think I was just waiting for the right time to tell the story. In the early years of the twenty-first century the story became even more relevant. When I gave up politics I had to do something with all that extra time so I drug out all my notes once more and wrote the Heir to Power.

What books have most influenced your life? The first real book I ever read was the biography of Wild Bill Hicock when I was in the third grade. I was so enamored, I read every biography that author penned. Another book that had a profound effect on me was The Ruling Class, which sent me right into the depths of politics. The Riders of Pern gave me the courage to write because Anne McCaffrey made it look so easy, which it really isn’t. Writing words is easy, getting it right? No, not so much.

What book are you reading now? Earth Abides by George R. Stewart.

What do you like to do when you're not writing? Read.

Anything else you like to do? I love to throw big parties.

Who is your favorite author and what is it that really strikes you about their work? I don’t really have a favorite author. I love Connie Willis and Janet Evanovich for their sense of humor and fun. I love David Brin, Larry Niven, Jerry Pernell, and Orson Scott Card because they can take something as fantastic as being on another planet and make it seem real and believable, almost common place. When it comes to colorful imagination J. K. Rowling is an absolute master. 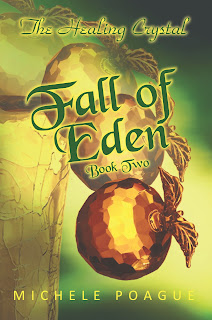 If you had to choose, which writer would you consider a mentor? Connie Willis. I try to read everything she writes. She’s very diverse.

Can you tell us about Flamingnet and the Top Choice Award you received for book one, Heir to Power? Flamingnet is a site that reviews books for young adults. Although the Healing Crystal isn’t marketed as a YA book, there is no graphic sex or over-the-top violence. The concepts regarding religious and political philosophy are adult and there are lots of characters that might be difficult for someone under 13 to follow, but the adventure is simple fun.

Some books in a series do not finish a story.  Does this book stand alone?
Each of the books are designed to be complete stories in themselves but with enough unanswered questions to hold all three books together.

This trilogy contains elements of rivalry between two sisters as well as two young men. Where did you learn to picture this so well? Is there something in your childhood that gave you the insight to portray this in such clear detail? I have five sisters and was born in the middle. I know what it’s like to be the younger sister as well as the older sister. I’ve watched my sisters fight, I’ve helped my sisters fight, and I’ve caused my sisters to fight. As to the young men, I believe rivalry and jealousy is something you learn from having siblings. The rivalry between two friends is not that much different than between siblings. Remember that all the young men were close friends first.

Do you have a specific writing style? No. I write what comes to me and then polish it. There are so many writers that I aspire to be like. Mostly, I just hope my writing is coherent.

Are experiences based on someone you know, or events in your own life? Yes, everything you write is about your own experiences. I don’t believe you can write well about things you don’t know. The actual situations in the book were created by the characters as they told me they were doing. I explore emotions through them.

Are there any new authors that have grabbed your interest? Patrick Rothfuss has written a fabulous book called The Name of the Wind. I’m on pins and needles waiting to read, The Wise Man’s Fear.

What are your current projects? Book three of The Healing Crystal Trilogy, Ransom, is in its final draft. I’m currently doing research on two new stories. The Candy Store is a time travel romance and Last Kiss is about a cocktail waitress who uncovers the ghost of a 1920’s Jazz singer while remodeling an old house. This is what I call an almost true story.

Name one entity that you feel supported you outside of family members. Lois Deveneau is as close a friend as one could have and is really more like a sister. She and I talked about writing a book when we first met. Her support has been invaluable. That said, Reggie Rivers was the first person outside my family that said I could write and that gave me the courage to publish.

Do you see writing as a career? Absolutely, there are lots of people who make a career of writing. Is it a career for ME? Currently writing is a wonderful hobby that might someday pay for itself.