The Camera Guy knows how to shoot. 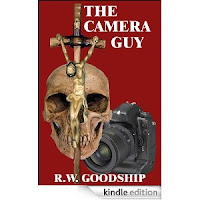 An interesting horror book has come my way. I believe it would be a great Throw-away Thursday book. A light read, with a decent plot, interesting characters but a bit predictable.   If you like the hero versus demon plot, you may find this a quick, enjoyable read. I caution that there is some foul language but it is pretty tame considering the book is about cops! What would you do if you had to investigate murders and you could see to the spirits of those who were killed? The Camera Guy (By Richard Goodship) knows!


The Camera Guy
By Richard Goodship

From Amazon:
Life was not easy for Forensic Investigator Bill Walters. His ability to see the spirits of the victims at his crime scenes gave him an edge, but it kept him isolated from his fellow Officers and gave him the reputation of being a 'Nutbar' on the force.
Bill could live with this. He could even live with the family of ghosts that haunted his apartment, the loss of his friends and religion and the estrangement of his daughter, Eryn.
What Bill couldn't live with was the Demon that came to town hungry for those spirits.

About the book:
The story opens at an accident scene where Bill Walters, a crime scene investigator, learns from the dead woman’s spirit how she was murdered. Bill has a hundred percent closure rate for his cases because of his ability to see the spirits. That doesn’t cut any slack from his new boss, who thinks having a nutcase on his staff is bad no matter how good he is at his job. To make sure he can rid himself of Walters, he assigns a psychologist to act as Walters partner. What Inspector Cox doesn’t know is Tom Watson will soon find out he, too, can communicate with the dead.

A series of odd murders lead Walters and Watson to believe there is more afoot than a simple human serial killer. When Walters’ whole life and all that he loves is threaten, he does something he thought he would never do again. He picks up a gun. He faces an unearthly terror and must decide between his soul or his loved ones.

I enjoyed this book though much of it was predictable. Still there is enough suspense and twists (it is Peg Leg Annie or not?) to keep a reader tied up in the book. A sign of a well written book is the ability to carry the reader out of the here and now and into the story. This book does a good job of it.

I did like the characters, especially Tom Watson and Walters’ close friend Tony, who is instrumental in helping Walters achieve so much. The Walters character might seem a bit flat to some readers but as a psychology major, what I saw was behavioral disorder stemming from long term depression. I believe the writer captured the essence of what this character would like if one were to meet him in person.

The terror in the book never got off the found for me but I am usually not moved much by horror. Still, I have felt the tension in such books as Congo but this never quite reached that level. Many readers have used the word creepy when describing the book and it is a definition that I can agree with. The horror may not have been strong, and the tension less than perfect but the creepiness was right up to the top of the meter!

I would suggest this book for anyone who is looking for an easy read with some interesting plotting and intriguing characters.