Today I bring you two loosely connected books, one is non-fiction book about metaphors and sayings, and the other is a book whose title became a saying in my lifetime.

Loose Cannons and Red Herrings: A Book of Lost Metaphors (not to be confused with its newer version of a similar title) contains the phrase Catch-22 which is the name of our second choice.

How do I tell if a book is good, not just a good read, not just fun, not just interesting but really, truly good? If, after the test of time, say decades, I still see or feel or am haunted by scenes from the book, I know, know, know that book is good. Does that mean it is a good read? Maybe not but like great poetry, if the piece speaks to me, moves me, causes me to think about it and its implications, it is a good piece. Today I am going to introduce you to a book that many have found impossible to read. Indeed, if it hadn’t been assigned in high school, I don’t think I would have gotten through the first three chapters (though there were many assigned books I never read…). Once I had gotten to the third chapter, I was completely hooked.

From Amazon:
Set in Italy during World War II, this is the story of the incomparable, malingering bombardier, Yossarian, a hero who is furious because thousands of people he has never met are trying to kill him. But his real problem is not the enemy—it is his own army, which keeps increasing the number of missions the men must fly to complete their service. Yet if Yossarian makes any attempt to excuse himself from the perilous missions he’s assigned, he’ll be in violation of Catch-22, a hilariously sinister bureaucratic rule: a man is considered insane if he willingly continues to fly dangerous combat missions, but if he makes a formal request to be removed from duty, he is proven sane and therefore ineligible to be relieved.
This fiftieth-anniversary edition commemorates Joseph Heller’s masterpiece with a new introduction by Christopher Buckley; a wealth of critical essays and reviews by Norman Mailer, Alfred Kazin, Anthony Burgess, and others; rare papers and photos from Joseph Heller’s personal archive; and much more. Here, at last, is the definitive edition of a classic of world literature. 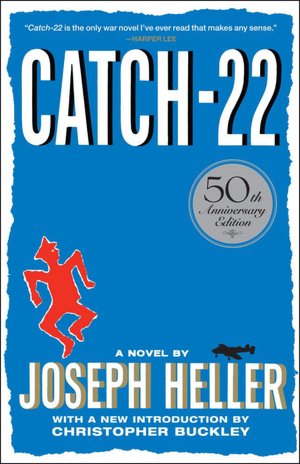 About the book:
This is a satire about war, about bureaucracy, about the disinterested, uniformed, unintelligent men (and women) who end up in charge, and about the people caught in the horror of all of it. The story loosely follows airman Yossarian as he navigates the terrors of war and the horror of those who control his life. There is a large cast of memorable characters who often unwittingly, but at times on purpose, influence the life of Yossarian as he tries to save himself from being killed in the war.
The book is not told in a linear time fashion, so a reader can get lost as the stories move forward and back over various events. The chapters tend to be character sketches, which take us through events only to have them repeated in another sketch through different eyes.

My take:
As I said, I didn’t immediately fall into the book. It took me time to realize how time flow was presented. Remember, I was only 15 or 16 when I read the book. I had not come across a nonlinear book before. Once I understood the presentation, I was hooked.
I had enough experience in life to understand what Heller was trying to get across, though I hadn’t any experience with satire. Those days were the middle days of the Viet Nam war, giving me additional insight to the book.
Much of the humor is subtle while most of it is over the top, in your face. For instance part of a sentence in the book reads “Chief White Halfoat was transferred out of Colorado at the first rumor of oil…” which is buried in an explanation of how Halfoat came to be with the squadron. While another part of the book contains conversations that sound like the Abbot and Costello routine of ‘Who’s on First’.
Memorable scenes for me included Orr tinkering with the stove ‘faucet’, Milo and his chocolate covered cotton, the dead man that wasn’t dead, and the most haunting was when Yossarian treated Snowden for the wrong wound. In fact, Snowden remained with me for decades in much the same way he stayed with Yossarian throughout the book.
I highly recommend this book for anyone who understands satire and has had experience dealing with bureaucracy. I will say this is not a simple or easy read but the gems are fascinating. For many of us, this book is laugh out loud funny. 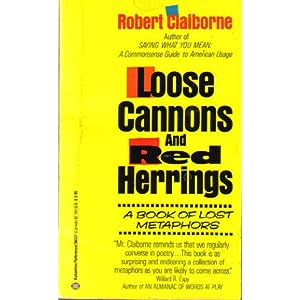 About the book:
This book contains many of the metaphors in use today and in the recent past, listed alphabetically, with an explanation of where the author’s research shows they originated.

Loose Cannons and Red Herrings contains words and phrases from cat and mouse to white elephant to aboveboard. My recent favorite, working in the craft of writing, is cliché and how it relates to stereotype and how they both relate to printing. Another is white elephant since we do white elephant parties this time of the year.

My take:
This book loosely covers many of the words and phrases we Americans are familiar with. It is more of an overview, without any true depth to the explanation; being more like a dictionary and less like an encyclopedia. However, because it is more like a dictionary, there are lots of words covered. Something that was appealing to me.
I enjoy picking up this book now and again to read up on one word or another. If you like to know little tidbits of information, this could be a good book to place on your shelf.