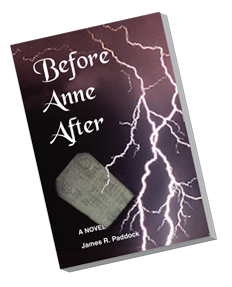 I want to introduce you to an author who is new to me and maybe to you as well. After reading a book that he suggested to me (at another author’s signing party) I have to say I will be seeking out his other books for personal reading pleasure. The story, which I promised to review last week - ahh, you know, the holidays and traveling and such - is another well done time travel story. I’m sensing a new favorite sub-genre coming on!

From Amazon: It’s July 1987. Through a series of small errors and oversights – a missed phone message, an unlocked high-security door, a lax in protocol, a falling purse – eight-month pregnant Annabelle Waring unknowingly stumbles into her husband’s time-travel experiment. She awakens in a 1943 Charleston Navy Shipyard barracks with no memory of the event. Her existence and her sanity become questionable; if not for her newborn baby and a Charleston, South Carolina police officer, she would certainly have checked herself into the funny farm. Her doctor, alias German spy, learns before she does that she is not only a time-traveler, but also a highly educated woman in the field of nuclear science and World War II history. When she finally discovers her own secret, Anne must strive to get both her and her infant daughter home, even at the risk to her own life.

Before Anne After starts you asking penetrating questions. “What would happen if man, or woman, could travel back? Would she be able to change history? Should she? Could she? And then what?” Imagine what the conversations would be like if she could meet with Dr. Robert Oppenheimer, who is in the middle of building the first atomic bomb, or Admiral Wilson Harris, as he prepares to observe the Philadelphia Experiment. Imagine if she could chat with Ernest Hemingway. Imagine what it would be like to be a modern, highly educated, highly intelligent woman in a 1943 society.
About the Book: A pregnant Annabelle accidentally sends herself back in time by 44 years but blacks out during the trip, waking up sure of herself but not sure of where she is or what is happening around her. She is so sure that everything is all wrong when suddenly she goes into labor, four weeks early!

Meanwhile, her husband is doing everything he can to find a way to retrieve her from the past with the help of a stranger who has simply shown up. The stranger refuses to tell Steven all that he knows and won’t even really say why he refuses to tell him.

Add to this a German spy who susses the truth before Anne does and you have a powerful story of intrigue, with twists and turns, and a treasure chest full of clues.

My Take: I simply loved this book. Maybe the ending wasn’t to my liking exactly but the writing is superb.  It must have taken me maybe two pages to get so hooked I couldn’t put it down. I loved how clues and twists are laid from the very beginning of the story though to the very end. The interrelationships are so well done as the story unfolds and then refolds onto itself, that I found myself doing the “Aha” thing over and over.

I enjoyed the characters, particular the police officer, who was so in love with Anne. Anne’s character was great, except for a tiny flaw. While I could understand Steven blaming himself for leaving the lab door unlocked, I couldn’t understand Anne’s blaming him. It was a bit like a thief blaming his stealing on the fact someone left the bicycle in the open. But flaws do tend to round out the characters and makes them feel more real and it is good to see a main character who is not perfect.

There were times where I thought there were continuity errors in the story only to find that everything indeed flowed perfectly. There were so many clues, starting with the first writing desk she encounters on page one, that, to quote a reviewer of Fall of Eden, “Personally, as soon as I finished, I wanted to go back and start reading it again, just to see if there were some things I might have missed while reading it the first time … fit …” * Not only did I want to reread it right after I was done, I wanted to reread it while I was doing this review.

I would highly recommend this book to anyone who enjoys intrigue and science fiction. It is a long book but I so enjoy full fleshed books! If you do too, I suggest you give this one a try.

I wrote this review of a book I purchased and not at the request of the writer or publisher.