Fixing the Environment by Changing Ourselves 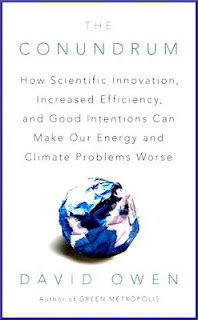 The Conundrum: How Scientific Innovation, Increased Efficiency, and Good Intentions Can Make Our Energy and Climate Problems Worse
by David Owen

Conundrum:
A paradoxical, insoluble, or difficult problem; a dilemma

Not every problem seems to have a solution. We really want it to be the case that there's an answer for every problem. In fact, we want a quick, simple, easy-to-understand, easy-on-the-budget, no-real-work-from-us solution to every problem we see around us. Maybe it's because we've spent too many years watching TV ads that tell us we'll get the girl if we use the right breath mint -- that's all it takes. Maybe it's because the depth of some of the problems (particularly when we talk about something as enormous as climate change) are so overwhelming that we can't stand the thought of sorting out all the details and coming up with solutions that work in the real world.    So we do what we can within our comfort zone.  But can we really make the kinds of changes that need to happen that way?

We've also got this idea that we can just tweak everything a little bit to make it better, and all those little tweaks (the ones that don't take much sacrifice from us, and don't cost us much money) will somehow magically work together to solve complex, multi-layered problems.

The Conundrum looks both at the various ideas we've come up with to solve the problem of environmental degradation and at the way we behave when we gain the benefits from those solutions. Technological advances in automotive design gave us cars that can get many more miles per gallon and use less gas, but when we got smaller cars with more gas mileage, why was it that we turned around and not only drove a whole lot further, but then turned to buying gas-guzzling SUVs?

“The point isn’t that science is evil, but merely that innovation seldom behaves exactly the way we think we want it to. Almost all the serious environmental problems we face now are the direct or indirect consequences of what seemed, originally, like awfully good ideas. Relying on technology to solve those problems means having faith in our ability to eliminate or contain the inevitable unintended consequences—a big gamble, if history is an indication. ”

We want to ensure that folks use less electricity, so we try to bring the costs down with light bulbs that burn less electricity to get the same light, and we want to get rid of CFCs in the atmosphere so we make air conditioners less big and bulky, use other materials to make them run, and get more efficient systems for less money. This should be a big win for us, but humans have this perverse tendency to take whatever gains they make in one area and apply them somewhere else, and that savings on the electric bill got applied to more appliances, computers, gaming systems, whole house A/C systems, plasma screen televisions and on and on.

Efficiency isn't all it's cracked up to be, apparently. Maybe part of the problem is that there is no real solution to the problem, but we're so convinced something will help that we're not willing to look at the downside of new technologies. Where do all the old cell phones go when new models come out every week and we need to have the latest and the greatest? Do we think of the environment then? Not really.

David Owen has provided a comprehensive look at how advances in technology and improving efficiency can backfire on us. In fact, this book may be a more comprehensive look at all of us and how we behave when it comes to environmental stewardship. It seems as though every time there is something new on the horizon, we take whatever advantage it gives us, and we ramp up our consumption, something that we say we don't want to do. I think this book is a must-read for everyone who has concerns about the environment, because some of the roads we've taken have made things worse, and if we want to understand how to avoid those pitfalls in the future, we're going to have to take a long, hard look at ourselves. This book has example after example of, for lack of a better term, how “what goes around comes around” and how gains we thought we'd made were lost. I can't begin to describe them all in this review, but I think everyone, particularly those who want to make real change in our relationship to our planet, should read this book.

"It’s easy for wealthy people to look busy on energy, climate, and the environment: all we have to do is drive a hybrid, eat local food (while granting ourselves exemptions for anything we like to eat that doesn’t grow where we live), remember to unplug our cell-phone chargers, and divide our trash into two piles. What’s proven impossible, at least so far, is to commit to taking steps that would actually make a large, permanent difference on a global scale. Do we honestly care? That’s the conundrum."

Just a side thought. Should you believe this is an attempt to discount the issue of global warming and climate change, you would be dead wrong. In fact, the only criticism I have of this book is a paragraph at the end making snarky comments about conservatives in general and calling out the Tea Party on their positions. While I've sworn to avoid reviewing things I consider politically based, that's the only place I've found politics in this book, and frankly, it's likely to push away some folks who might otherwise be quite inclined to agree with him. Owen is someone who truly wants us to make good on our rhetoric about saving the planet, and the core message he's trying to deliver is something we really need to hear, whether we want to or not.

Don't miss this one.