Death by Soap? Marlowe and the Spacewoman 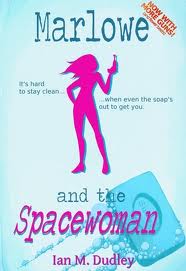 Farce -a light dramatic work in which highly improbable plot situations and exaggerated characters are often used for humorous effect. A comedy characterized by broad satire and improbable situations.

Now it might not surprise you that I like a good farce. I absolutely love the TV shows Eureka and The Big Bang. I read Midsummer Night's dream when I was 13 and adored it.  Not to mention that I collected the Myth Adventure series by Robert Asprin, loving every minute of the tongue in cheek adventures. However, it is better when you know something is meant to be a farce!

I settled down to start reading  Marlowe and the Spacewoman, thinking I was in for some serious science fiction reading.  The first few pages were a little strange - talking dog and acid rain - but I survived. Then our hero gets killed by a bar of soap who bubbles "Nothing personal" as it removed the needle from Marlowe. "Just business."
It is then I begin to think this book is maybe a little too strange for me. By  end of the next ten pages, light has dawned and I have a slumped forehead caused by the slap of the heal of my hand as I said over and over, "So this is that kind of book." Had I taken the time to truly read the "Praise for the modest Ian M Dudley's Work" section in the front of my Kindle copy, I might have sussed  the situation from the very beginning. I won't spoil the fun for you but do take a minute and read it when you get your copy.

Marlowe and the Spacewoman
By Ian M. Dudley
Published by Pallmark Press
Pages 324

From Amazon:
For Marlowe, an over-worked and oft worked over private eye recovering from yet another emergency resurrection, it's the start of a long day. He's murdered by a bar of sentient soap in the morning, and just when he's recovered enough to grab some lunch, a femme fatale crash-lands outside the City, causing a major political disturbance.
Forced by the government to investigate her claims to be from outer space, Marlowe struggles to strike a balance between solving his own murder and resisting his attraction to the alleged yet alluring extraterrestrial. All while dodging additional assassination attempts and the meddling of powerful figures who have their own ideas about how the 'Affair with the Spacewoman' should end.