Beyond Hades and hopefully back again 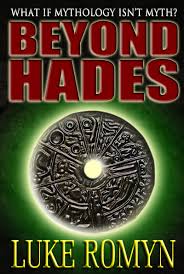 When I first really started reading, what children nowadays call reading chapter books, I began with fairy tales.  As soon as our school library had nothing new to offer, I went to work on mythology and while I liked the Greek and Roman myths, the Norse myths were a bit harder to understand. Well, I didn't get the Spanish fairy tales either. Alas! Our library only had two bookcases of fairy tales and one of mythology so I was soon out. A friend suggested science fiction which I turned my nose up at immediately but sometimes being desperate is just that. I picked up a copy of Space Cat by Ruthvin Todd. Needless to say I was hooked. BTW Amazon says you can pick up a used copy of Space Cat for about $144.00. See, I told you it was good! So how pleased was I to find today's book choice has elements of both mythology and science fiction? Strutting in my Sunday best pleased. And it didn't hurt that the writing was good as well.


Beyond Hades (The Prometheus Wars)
By Luke Romyn

From Amazon:
What if mythology isn't myth? The ancient Greeks told fabulously detailed stories involving unbelievable creatures - monsters dominating all tales from that time. Were they just highly imaginative, or was their inspiration from somewhere else?
Doctor Talbot Harrison, a professor in archeology, receives a phone call one day which will destroy everything he perceives as reality. His brother has been mysteriously killed and within moments the United States Military appear at his door, literally dragging him from his home. Thrown into a helicopter under intense armed guard, it doesn't take long until they are attacked by something which cannot possibly exist, something drawn to destroy the one man who can stop the beasts from a land beyond Hades....

About the book:
The US Military opened up a doorway to what they hoped was a powerful weapon but which proved to be a well of incredible beasts bent on destruction. Unable to fight off the evil coming through the doorway, the General sends for the only man who can help them, Talbot Harrison. What the General doesn't tell Talbot is that the General himself is responsible for the death of Talbot's brother. Why was Talbot's twin brother so important and after his death, why is Talbot so death defyingly important?  It's because they can read the strange writing on the exotic equipment used to open the doorway- read it as if it were English. Because of this, Talbot is the only one who can close the doorway.
Talbot is thrust through strange lands, meeting interesting people and beasts alike as the world depends on him to find a way to close the doorway from the other side. He is assigned a protector, an Aussie named Wes, who is incredibly talented in the ways of self defense and sometimes offense. Together they roam through different worlds, face down enemies and make friends, while trying to find the back door of the gateway. Little did they know that one they have to trust is someone they absolutely cannot trust. But their true enemy remains hidden for much of the book.
If you are familiar with mythology, especially some of the more obscure tales, you will meet many of gods, beasts and men you know. Some of them will show up as different somehow, others will show up just as you remember them. Heracles, an old time favorite, doesn't disappoint in this story.

My Take:
I like unique takes on old stories especially if they are entertaining. I still remember Larry Niven's short story, The Nonesuch, a take on Red Riding Hood. This book does a such fine job of marrying myths with science fiction, that you will have little trouble 'believing' in the reality of the story (science fictionally speaking) once you get over the whole dimension traveling thing, that is. Of course some of the things Talbot and Wes encounter are more than a little farfetched but different dimensions, different rules.
I found the writing quite engaging, almost a complete page turner, stay up until midnight type of book. Talbot manages to grow within the story, something that is rare unless it is the focus of the story which I don't believe it is, and is even rarer in an action story. This is a nice change from books that tell of the hardships a character goes through only to find the character is churned out just as he went in. Wes is the kind of warrior we find in our present day heros like Robert Downey Jr as Ironman or even Sherlock Holmes. Smart, capable, charming to a point, with a smart twist of humor. (Readers should beware. Wes uses vulgar language! The other characters don't don't - maybe a small tad.)
The only weak point in this action packed scifi is the compression of time doesn't seem to work as the compression is one way for the first 3000 years but reversed for the other. The time dilemma at the end of the book comes up a little short as well. Still, if you are in it for the action, it remains a very good read. The writing is  clean with enough description to take you into the story without distraction.