Every Last Kiss and breath 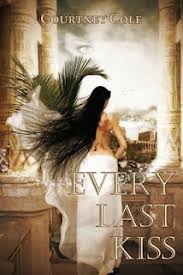 Some books are just enjoyable, fun, and easy to read. Even some of the more involved books are simply enjoyable having no thought of being anything but entertaining with maybe a splash of history or science thrown in for flavor. These are the kind of books you sail right through. They are pager turners, one more chapter, another ten minutes I promise type of books. They allow you to live in the story, be part of the action, know the characters without asking a lot of you in return.  Books like the Harry Potter series and Startide Rising whisper their story to us and all we need to do is turn the page.  Every Last Kiss by Courtney Cole was that kind of book for me. Reading almost straight through without a break - well, I did sleep...once - I found myself wanting more at the end. Don't get me wrong, the story was complete.  It's just there is more to come and I want it.

Please note that the first line in the book description on Amazon is a spoiler and I have left it off of this book description.  Might I suggest you not read the one at Amazon if you decide to read the whole series.

From Amazon:
17-year old Macy Lockhart is as far from normal as any one girl can be. The problem is, she doesn’t know it yet.
know it. She learns that she has lived thousands of lives, each one ending tragically…but none as tragic as this one.
After returning to ancient Egypt, she is faced with heart-wrenching decisions. Unless she interferes with Fate’s plan, the very thing she was born to protect, her soul mate will die leading Marc Antony’s forces against Rome. Can she really stand aside and watch the love of her life die all over again?


About the Book:
We find Macy mad, too angry to speak mad because her loser boyfriend was captured on film (as we used to say) kissing up another girl IN PUBLIC.  Now no one wants their boyfriend or girlfriend to cheat but we REALLY don't want them to do it where the whole world can see what a fool we are. Macy does what so many of us have done with her girlfriend's urging.  She gathers up all that he has given her and left with her to take them to his house but first she totally destroys them.

Here the tale of Macy and the deadbeat ends because someone has delivered her a bloodstone necklace. The necklace comes with a scary looking old man who wants her to remember who she is. The only way she can is with the bloodstone but just as she begins to remember the old man (priest) transports her to her old life as Charmiam, Cleopatra's handmaiden. What the priest really wants is a mystery but it is clear that Charmian can change the past if she has the courage or the foolishness to do so. And the priest is pushing Charmain into changing the past. To make his point that the past can be changed with no consequences, the priest brings a man back from the dead - a power hungry man who wants Macy's 'magical' bloodstone for himself and he doesn't care who he must kill to get it.
The priest who transports her is not the only one pushing and pulling on Macy. The 'organization' that Macy belongs to has a vested interest in having the Keeper, as Macy is called, toe the line,  Both her handler and the Fates themselves threaten Macy with the total destruction of the world if history doesn't play out as it once had.
To complicate matters, Macy/Charmian is in love, desperately in love, with a man who must die for history to remain intact. For her to die means nothing as she knows her current life is waiting for her. But this seems not to be true for Hasani, the man she loves, nor for the others whose lives must be sacrificed.

My Take:
I really enjoyed this book.  The writing is very smooth and the descriptions artfully placed in the story so they are an addition to the story rather than a distraction.  I liked all of the main characters almost from the start, I suspect because they remind me of people I know.  This is more of a 'clean' romance where we know lots of sex is happening but the description is more like "he kissed her deeply as he lay her on the bed, his foot pushing the door closed. Later, he watched her comb her hair." If you are looking for erotica, this is not your book.
There are a couple of things that I didn't like, the biggest was  Cleopatra and her people spoke in modern day slang and idioms. This was quite jarring. Cole would have been better off using standard English, since this is a translation of sorts. The other was a tiny continuity error where Charmiam has her hands on the queen's shoulders, then walks across the room to kneel in front of the queen.
When you read this book, do not think of the main character being 17 years old and having sex with a 40 year old man.  The story makes it quite clear in the beginning that Macy becomes herself as Charmian with all her feeling and thoughts.  She has left the 17 year old behind. I fear that some people might confuse this with what happens in the movie Freaky Friday, but I assure you that the soul is an old one, not Macy but really Charmian who is in her late 30's.

I do recommend this book if you are interested in a romance with intrigue and mystery thrown in. I think you will enjoy this book as much as I did.  I so want to read the next book in the series.
Posted by Sunday Smith