Dreams and Vampires: an Interesting Interview

First, don't forget to check out our newest blog tour - Fall of Eden by Michele Poague.  There are lots of prizes for blog readers and bloggers and it is so easy to enter!

Have you ever wondered what a character from your favorite book would have to say? Have you ever wanted to interview one of those characters? What kind of questions would you ask?  How do you think they would answer? Would you learn more about their backstory; about them? Today I have something unique for you -  an interview  with a character from Dee Krull's book, Dreams and Vampires. 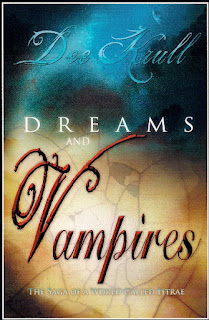 
What if everything people thought was an illusion turned out to be true? What if the stories they thought were fantasy, are true? Many great authors have written science fiction novels about events that are now scientific fact and today physicists are saying that parallel worlds are a real possibility. Explore the possibility of a parallel world with me, where vampires and werewolves are sentient beings and how my dreams change my life.

I am a Clinical Hypnotherapist, and after many years of practice I am very good at what I do. However, when my clients begin to vanish one by one, taken by a vampire calling himself Naken, I begin to fear that somehow the hypnotherapy is also responsible. Raithe, my best friend and sometimes assistant, fears for her own life, as well as my clients'. In a race against time the two of us try to figure out why my clients are being taken and how to stop Naken from taking anyone else. But this is not the only dilemma I face. There are Ben and Kianas, the two loves in my life.


The choices I must make are tantamount to what the future holds for me and the people I love. Ben, a love from my past has just come back into my life, rekindling the love we felt in the past. Kianas is a new love who promises me a future that I could never have imagined, on another world called Htrae. Htrae is a world from another universe filled with beauty beyond belief; but it is also filled with danger-one that threatens to take my life and my ability to hold on to my past. If I allow Kianas to turn me, I may never be a part of my son's life. But if I stay human I am told, I am in danger of losing my life.
Filled with intrigue, danger, excitement, and romance, Dreams and Vampires is also set within the realm of possibility being explored today by astrophysicists. Are parallel worlds real? Is it possible that the stories of mythical creatures handed down for hundreds of years are beings from another universe? You tell me, is this all a dream? Or am I really the one?

We all want to be different, so what is the one thing you wish your creator had done differently with you?
Well, I have a very sarcastic attitude and love to make use of it through humor. She did use it a bit but not enough. I think I should have been a little tougher and confronted the vampire Naken more than I did. He was destroying my hypnotherapy practice and taking my clients away. I should have tried harder to stop him. In the end he would have taken me anyway but I should have at least tried to stay on Earth.

If you could have added something to the story, and your creator would have let you, what would that have been?
I would have added a romantic scene with Orruck the leader of the Werewolf. He kisses me then leaves because he knows I have mated with the vampire Kianas. I would have responded to that kiss and let it go further with a hint of a possible future romance. I could tell when we met that Orruck wanted me and if it had gone further I may not have had the eventual experience that almost caused me to lose my life.
It doesn't help that someone else held the pen and ink of your life, does it?

What do you love best about yourself? What do you like least?
I love the fact that I am a compassionate person and want to help the people of Htrae. They are recovering from a terrible war and there are many things wrong with the way the King is handling the conflict between his subjects. His fear is causing more problems because of the secret that could be his undoing.
Kianas fears for my life so he wants to turn me to keep me safe. I want to stay human so every time he tries I become angry and petulant instead of helping him understand why it is so important to me. Eventually I do but I don't make it easy for him when he is only trying to keep me safe because of his passionate love for me. I do return his passion but on my own terms without considering his.
Sometimes we are that way with the ones we love and we don't know why. Being a therapist doesn't always let you find the right path.

What part of the book was the hardest for you and your creator to work through?
The beginning of the book was hard because it was about who I am, how I became a hypnotherapist, how I met Ben and my husband Peter, and why my dreams were so important to the story. I needed to let people know what led me to my beliefs  and how I came to understand my dreams and their connection to hypnosis all the while making it intriguing enough to want to know more with each page they read. It took a while before it flowed into the meat of the story. Once that was accomplished things really started happening and people started vanishing.

Is there a sequel for this book? If so, what do you want to accomplish in the next book.  If not, do you wish you could continue your story?
Yes. I want to plant the seed of possibility in the minds of the readers by exploring a new and dangerous parallel world with creatures and beings once thought to be myth. I want to interact with more of the beings and find the conflict between them. Since the book is almost finished I am already doing this while also falling in love with another unexpected character causing conflict between him and Kianas. This is also when I begin to change and I become challenged in some very unexpected ways.

Do you have anything else you would like to add?
Yes, I would like to talk about the actual parallel problems on Htrae and Earth. This world is more advanced than ours having traveled to other universes for millions of years. But there is still prejudice among it's inhabitants and a secret that has been kept for thousands of years. If known this secret would start another war and I am a very large part of this secret. This is where the dreams come in. Even though I resist what I am being told my mind knows it is true. There in lies the question: Who should I be true to, myself or this world called Htrae, as the saga continues?
Secrets are always a burden.  I look forward to seeing more of you and learning more of your story. Thank you for sharing your thoughts with us!

If you are interested in learning more about Laurel and her story, check Dee Krull's book out at the following links
Purchase links: www.dreamsandvampires.com www.amazon.com/Dee-Krull/e/B005N3ZR1G  www.barnsandnoble.com/deekrull www.smashwords.com/profile/view/deekrull
Or just contact Dee at these links.
Dee's blog:  www.dees-world.net
twitter: www.twitter.com/deekrull
website: www.dreamsandvampires.com