From the Fall of Eden until Now

Remember to check our Fall of Eden page for great giveaways! It is open to all bloggers and readers!

Have you ever done something because it has always been done that way? There was an old story about a young woman who cut off the ends of her roasts before cooking them. When her husband ask her why, she told him her mother always did it. When the husband asked his mother-in-law, she told him HER mother always did it that way. So he asked his wife's grandmother and at first she was confused. Then she remembered. Back in the day she didn't have a long enough pan, so she cut the roast's ends off. People do lots of things because their parents did it that way or they believe their religion demands it or it has never been done differently. Today's feature by Michele Poague takes on this idea of continually doing something long after the reason for it has been forgotten. 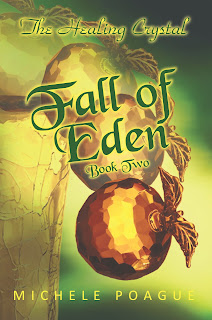 
Myths are but shadows of a greater truth.
What is the Healing Crystal and who is the rightful heir? Is it a religious object or a powerful weapon? Does it belong to a fallen line of kings or to the colonists of Survin? Should its fate be left in the hands of the young and inexperienced Kairma or to Narvin, the last descendent of a line of kings?
Kairma holds the Crystal and believes she will become the next leader of Survin, while her younger sister Kinter, believes she, not Kairma, is the rightful heir. Narvin believes the Healing Crystal is the Star of Genesis, a powerful relic his ancestors have been seeking for centuries.
Determined to possess the object that will return him to his glory, Narvin is unwavering in his quest to possess it, and Kairma is caught in a fierce race across barren deserts and rugged mountains to a shattering finish where the winner must decide the fate of the world.

About the Book:
This book takes place several days after the end of book 1, Heir to Power. Those who liked the first book will be pleased to find Kairma preparing for her coming of age and mating ceremony; many of those same people will be holding their breath to find who will be chosen as her mate on that special day. Alas, fate is not so kind. Survin is attacked by people wanting revenge. Kairma and several others are forced from their homes and families. Chasing them across mountains and deserts is a man who is bent for leather on owning the healing crystal, though he knows nothing of its true nature. We see the evil in Narvin, though Kairma and her fellow travelers can only guess.one
In book one, we watched as Kairma grew into her responsibilities. In book two we witness some changes in Kinter,  Kairma's sister, but more than that, we see sides of Kinter not yet fully revealed. The dynamics between the two girls has not changed; they still are jealous of each other and they still fight with each other and love each other.
As the plight of the young Survinees becomes desperate, we readers learn that no one is safe. The band loses some important members as Narvin and his followers nip at their heels. But that is not the only thing Kairma has to worry about - she finds herself hearing voices and then seeing things. Is she going crazy or will the Crystal finally reveal its true nature?
While our young heros race across unknown terrain, Isontra and others left behind must deal with those who attacked Survin and too often with each other.

My Take:
First, I want you to know that I read through all 400+ pages in one day.  I simply could not put the book down. Second, the book made me laugh and made me cry. To me that is just what life is about and books should imitate life. Books that move me emotionally always have a place in my heart.
Poague has retained her ability to create fantastic characters with solid dialogue and motives, leading the reader to become vested in each one. I have read the book several times over and still cry when one of the band loses his life.Third, the main plot is still strong but some of the side plots expand to bring about some interesting points in support of the main plot. When Naturi and his father learn the true nature of the crystal and therefore of their religion, both, though equally pious, have totally different takes on what it all means. Poague does a good job of showing us not only their differences but also the reasons for their attitudes.

Recommendation
I highly recommend this book and though it stands on its own, I would strongly suggest reading book one, Heir to Power  so the full flavor of each character comes through. There are heros enough to go around from the young woman, Kairma, to the two men trying to win her hand, to old woman Isontra and even Naturi's father. My favorite minor hero is Rose. I would love to hear about yours!
Posted by Sunday Smith