The Breeders - A Dystopian Future 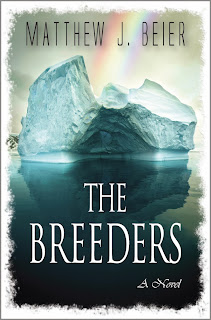 What ifs are often the business of science fiction. What if there were faster than light travel? What if mutant bugs took over the world? What if we really could control our genetics? Science fiction helps us to look out at the world with a more objective view, so we can see our flaws as others would see them, and hopefully get a clue. When the landscape is not some far out planet, or far future vastly different from our own, however, the lessons are harder to see.

In Matthew Beier's book, “The Breeders” the time-line is uncomfortably close. While there are a few very basic differences, the environment is Earth, the day to day life is not very different, and the reader feels pretty much in the present, but things have been tipped on their head without any clear reason why.  It's as though we passed through some kind of other dimension (without having been told we were on a new episode of “Sliders”) with no warning of any kind. This results in an extreme discomfort in the reader, who is unconsciously trying to map what they're reading to the real world. This discomfort is so profound early on in the book that I initially rejected reviewing it, but promised the author I would soldier on 'til the end. It's controversial at a number of levels.

This is a world in which the people in charge were previously picked on, and the homosexual population is now in charge; heterosexuals are now the ones being pushed out and abused with impunity. Only those registered can become breeders. Everyone is “chipped.” Parents choose not only the general characteristics of their children, but their sexual preferences as well, but the needle is moving ever further away from center, and politics and policy are pushing heteros out to fulfill a plan that is not only built on prejudice, but on a degree of obsession beyond sanity, and our main characters are caught right in the middle of it. Those now being held down, have no use for the new rulers and the kind of “hate speech” that goes on in every ghetto in every generation is well on display, making reading quite challenging, although, in a world with this kind of domination, it would actually be there.  Since the subject is often sexuality, it's also X rated for many tastes, so be forewarned.

Historically, humans create their nightmares over and over again, picking winners and losers and pushing out those they deem losers. The Jews in Germany, the Romany in Europe, the underdogs in every culture, dream of turning the tables on their oppressors, imagining a world in which the oppressors are now the underdogs, and the former losers are on top. In those imaginings, bitterness and hatred play a large part, as the former victims seem to believe “turn about is fair play.”

But much as children who have been abused, no matter how strongly they feel that they would never follow the footsteps of their abusers, often abuse others just as viciously, policies that create second class citizens and abuse power generate a pendulum swing that mirrors the evil; often the goal is revenge, not real justice. The ruling class in “The Breeders” is on that path, evil has begotten evil.

The main characters are well-drawn, but they are juxtaposed against a bureaucracy that has no face, a ruler, often mentioned, that we neither see, nor understand, and this is somewhat unbalancing. There is a sense that those in the ruling elite are cardboard, with no reasons to do what they are doing (as though the author expected the reader to know that there is revenge underway for things that happened in our world, not the one we're reading in), no sense of what goes on in their minds or hearts, and this is a flaw that makes the book come closer to a cross between space opera and Stephen King than a real tough look at how power and discrimination work hand in hand. Beier has the writing chops to do the latter, so, in that sense, this is a bit of a disappointment.

I was surprised to find that this book was highly rated by the LGBT community; there is a heartlessness in these rulers that I would not want associated with any segment of the population I belonged to. Because the issue of power and revenge are not addressed, the cruelty seems an inherent characteristic of the homosexual power elite, and I don't think that's what the author means to convey.

The Breeders does a very good job of bringing the reader to a full understanding of a number of the major characters, fighting to survive in an evil world, and gives us a lot to think about regarding how far we let things go before we take action, what we would do should we find ourselves the underdog, and what's really important in life, but had the author been willing to attack the core issues of using power for vengeance, to tell the necessary back stories of the injustices that caused those in power to wish to use it in this fashion, and to show how people who manage to gain power are twisted by it, this would be a fabulous book that would be more accessible to everyone and really get the cranial resources in gear.

Having said all that, as I look at the Amazon page, there's an update from only a few days ago, so it will be interesting to see if any of these issues have been addressed.