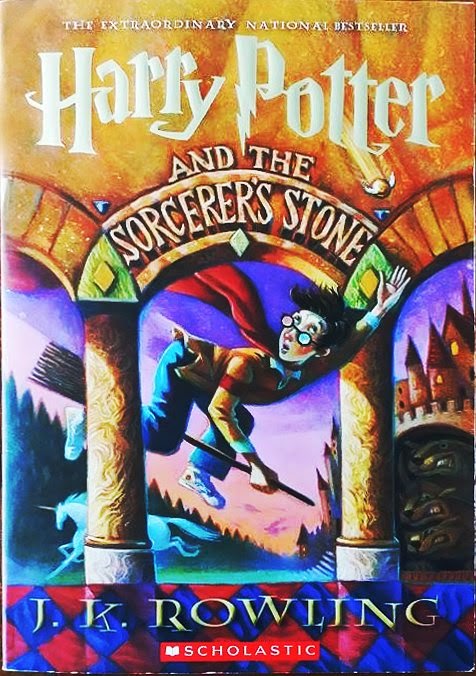 
It would be difficult for anyone not to have at least some knowledge of what has become the Harry Potter Universe (HPU). When Harry Potter and the Sorcerer's Stone was first released, it became an instant classic. Children and adults alike became immersed in it.

I personally jumped on the HPU bandwagon a few years late. I caught a bit of the third movie when it came out on TV and got hooked, soon acquiring all of the books and movies that had come out to that point. I then proceeded to purchase each new book and movie as soon as they came out. It would therefore be impossible for me to review the book version of Sorcerer's Stone without at least acknowledging a few major issues between it and the rest of the HPU.

Sorcerer's Stone the Book Versus the Movie:

The question of what is better, the book or the movie, is one that has plagued people long before Harry Potter ever existed. Books usually come first. So, purists claim that books are best. I personally don't feel like that applies to the HPU. I feel as though both the books and the movies have their own unique charms, as well as their own problems. Harry Potter and the Sorcerer's Stone, as the opening book/movie in the series, is a prime example of that.

The movie is clearly more visual, allowing us to see the HPU brought to life on the screen. However, the book leaves more to the imagination, which is often a good thing. It also allows us to have a full understanding of what Harry actually thinks throughout the story. I find that inner monologue extremely valuable.

The actors in the movies make the characters come to life, especially the character of Dumbledore, and make them more memorable in the process. However, the book, along with several of the other HP books, has an entire character that all of the movies completely ignore, Peeves the Poltergeist. The Peeves issue happens to be one of the most well-known and consistently argued pet peeves (pun intended) of the HPU.

Sorcerer's Stone the Book Versus the Other Books:

As an avid Harry Potter fan, I have had many discussions with other fans. Almost unwaveringly, they say that Sorcerer's Stone is their least favorite of the 7 books. I'm inclined to agree, if I look at it as a stand-alone book. It lacks a lot of the excitement and adventure of the other books. However, when you consider the fact that Rowling intended it to be book 1 in a 7-book series from the beginning, that makes a lot of sense. It's meant, essentially, as an introduction. That explains why it is both shorter and less exciting than later books in the series.

Negative Elements of the Book:

Sorcerer's Stone is approximately 300 pages long. That's quite short for a Harry Potter book. Rowling might have been better off to try to elaborate a bit on a few plot points, even if it meant extending the book to 350, or even 400, pages. Instead, the first 100 pages or so of Sorcerer's Stone seem to more or less just be a character list naming one character after another starting with Harry, the Dursleys, Professors McGonagall and Dumbledore, Hagrid, Quirrell, Malfoy, Madame Malkin, and so on. The constant procession of characters is interesting, but could be a bit overwhelming to anyone who starts reading the book series from the beginning. I had the advantage of already knowing many of the characters a little bit from seeing a movie or two before I ever read the book.

Another problem I have with the book is that, whether intentional or not, Rowling seems to start second-guessing her abilities near the end. She doesn't seem to trust the reader to understand her anymore. So, she begins bluntly stating the obvious. In fact, near the end of the book Dumbledore has a conversation with Harry that lasts for several pages. In that conversation, he basically rattles off a list of all of the morals of the story and touches on such topics as truth, love, good versus evil, greed, power, fighting for what's right and so on. It's like Rowling knew the messages she wanted to convey throughout the book, and did an excellent job of conveying those messages, but she felt the need to say “Just in case you missed it, here's a list of what you should have gotten out of this...”

Positive Elements of the Book:

Rowling's seeming mistrust of her own abilities aside, one of my favorite things about this book, and all the other Harry Potter books, is that it does have several good morals, and it doesn't just rattle them off (until Dumbledore's talk with Harry at the end). Instead, it tells an entertaining story and we learn from it without it feeling like a school lesson as we're reading.

The setting and characters are, of course, also some of the book's most fantastic elements. Rowling managed to create characters and an entire fictional school that have become household names. When you add to that the fact that she also created dozens of believable magic spells and made up creatures, it's easy to see why people of all ages love this book and the entire HPU. The fact that she did all of that using simple, understandable language is just an added bonus.

As a stand-alone book I have to give Harry Potter and the Sorcerer's Stone a 4 out of 5. It makes a great effort, but it really can't hold up entirely on its own, in my opinion. However, as arguably the most vital part of the HPU, I give it a 5. It manages to introduce us to an amazing and unique world full of fun and interesting characters and leave most of us on the edge of our seats wanting to know what the next adventure for Harry and his friends will be. It's also a book that most of us can and will reread multiple times, making it a timeless classic.
Posted by Eva Kosinski (Gabriella Wheeler)