Johnny Graphic and the Attack of the Zombies 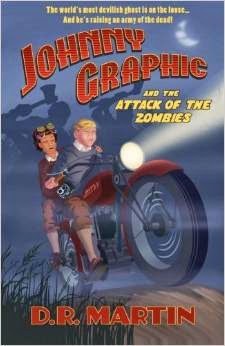 Johnny Graphic and the Attack of the Zombies is the second book in a young adult (Y/A) book series. It follows the adventures of Johnny Graphic, a boy photographer. The setting is the 1930s, but it's not the same 193os we all know about. In this author's version of the 1930s, ghosts co-exist with the living, but only some of the living can see them. Those who can are called etherists. Johnny's sister, Melanie Graphic, is an etherist, and she belongs to a group who is dedicated to understanding how ghosts interact with the world of the living and how the ether (the area where the ghosts exist) works.

In the first book of the series, we were introduced to Percy Rathbone, who had a plot to create and set off etheric bombs. Percy happened to be the son of Dame Honoria, a friend of Johnny and Melanie's family. In the second book, Percy is at it again. In book two he is out to create an army of bog zombies, and they're kidnapping children under the cover of a mysterious fog that has descended upon the countryside. Johnny, Melanie, and their old friends set out to stop him.

Soon, it becomes clear that Johnny and his friends have to split their efforts. While Melanie and Dame Honoria try to research the problem and figure out what Percy is trying to do, Johnny and his friend Nina set off to rescue the children. Along the way they meet some new human and ghost friends that try to help them in their quest. But as some questions about what Percy is doing are answered, others arise, especially questions regarding the disappearance of Johnny's parents, who have been missing and presumed dead since the start of book one, and how their disappearance tied into Percy's plans.

It's important to note that I knew this was book two in the series before I read it. In fact, I had already read and reviewed book one. You can see my review of that book here http://abookadayreviews.blogspot.com/2014/06/johnny-graphic-and-etheric-bomb-johnny.html. Since I had that knowledge, I went into reading the book with a sequel/middle book mentality. I was already familiar with the characters and already somewhat knew what to expect in terms of writing style. This book definitely did not disappoint. I found it to be written just as well as the first.

One of the things that I really enjoy about D. R. Martin's writing style is that it is descriptive, but in a plain, uncomplicated way. It's written so that the target (Y/A) audience can easily understand it. However, many Y/A novels are written in such a simplistic style that they are boring. This book actually held my attention so well, as did the first in the series, that I didn't want to put it down at times, and I'm a full-grown adult. Yet, it's written in a way that a younger audience should be able to not only understand it, but enjoy it. It's full of adventure, excitement, action, and suspense.

Another thing that I like about both Johnny Graphic books is that, in my opinion, they aren't one-time reads. I've happily added them to my permanent library. I expect the Johnny Graphic novels to become like familiar old friends that I reach for when the mood strikes me, much like Anne of Green Gables or Harry Potter.

I give Johnny Graphic and the Attack of the Zombies 5 out of 5 stars. It's fun, exciting, and attention grabbing, while still being a light, easy read that can be enjoyed almost anywhere from bed to crowded airport terminals. However, I would caution readers to start with the first book, not the second. Many important concepts and characters are introduced in the first book. The second book does not work well as a stand alone novel.

As of January 2015, there is no third book in the series yet, but I hope that there will be soon. Although the book two story feels well-rounded, there are definitely some loose ends, which leave plenty of room for series expansion.

Book: Johnny Graphic and the Attack of the Zombies (Book 2 in Series)
By: D.R. Martin
Publisher: Conger Road Press
Length: 318 pages
Genre: Young Adult (Y/A)
ISBN: 978-0985019631
Available on Amazon.com as a paperback or for Kindle