From Maverick to the Notebook 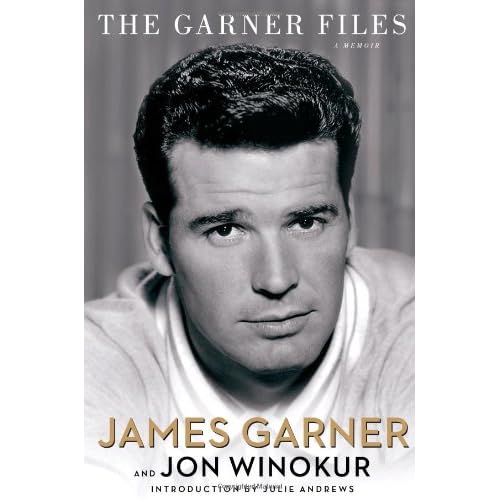 First, I must admit I have loved James Garner, or at least the parts I’ve seen him play since I was about four years old. While I have never gotten into the fan thing, there are a handful of actors and actresses who have brightened my life. (They don’t use the term actress anymore; my niece is an actor.) But the brightest among them has always been James Garner. If Lorne Greene as Ben Cartwright was my father, James Garner as Maverick, was my husband. Of course I had to get the book.


Julie Andrews writes the introduction to this memoir. She lets the reader know just who James Garner is and he is a sweetheart, over and above all else. So much so, she tells us twice.

James Garner follows with a quick note to the reader proving he is everything Julie Andrews said he was.

The book begins with Garner’s background in Norman, Oklahoma, a small place in the middle of the country. His childhood was filled with turmoil and, like many of that time, he began working away from home at fourteen. The next part of the history takes us from Korea to Broadway to Maverick and the Big Screen. There are full chapters devoted to racing, politics and golf as well as acting and producing.

Jim, as everyone calls him, is open and very willing to call a spade a spade. (Old country saying referring to the difference between a spade and a shovel ;-) ) The reader will discover Jim has only been in love with one woman, Lois, and loves many more.  He is faithful as a husband and a friend, loyal, honest, and good for his word as well as generous. Jim will be the first to tell you he drank too much at one time, smoked too much for far too long and has a temper which is mellowing with age. The reader will discover who he liked, who he didn’t like, who he thought was professional and who he thought was more trouble than they were worth. And just as he was in life, Jim is not afraid to throw a punch or two in this book.

Among other things, the book covers a bit on how the studios tended to work against the actors, some of the best places to play golf, and what it was like to race in the Baja 1000. Most the stories are funny or entertaining, though some like the time Jim was beaten up in a traffic altercation were downright sad.

James Garner has lived his life to the fullest, often doing his own stunt work. Because of this, he has been in a lot of pain most of his later adult life.  I heard him once say, on television that he was separating from his wife because his pain was causing him to be hard to live with. He mentions this is the book. He also mentions the use of cannabis for the pain. (Mr. Garner, if you’re listening, L.E.A.P. –Law Enforcement Against Prohibition could use your endorsement and/or help!). Didn’t I say he was a straight shooter?

At the end of the book Garner gives his take on the movies, television shows, and miniseries he has done. I still remember the paper cut in 36 Hours and how I knew it would some how be important later in the film, even at the tender age of eleven, so I agree with Garner’s take on this film and many others. There are several photographs included at the end that I found interesting.

James Garner always looked like he was playing himself, as if he wasn't acting at all. He will be the first to tell you he worked hard to achieve that look. He brought a whole new feel to the Western hero and the modern day detective, making the whole world take notice. I am only one in millions of fans who will always be grateful to him for making these successful along with his writers, to whom Garner gives much of the credit. We all noticed and because he made it look like he was just being himself, millions of people thought they knew him personally.

My take:
Of course I loved reading the book since it was by and about one of my few heartthrobs most of which are fictional characters. (And NO, I still don’t like to read Romance!) But here are some things, you, my dear reader can take to heart.

The first half of the first chapter got off to a rocky start. My grandma wrote a book called ‘This is My Life’, where there was too much I did this and I did that without enough story to make you feel engaged in the book. While the Garner Files start this way, it does move into a more interesting mode of writing soon and the reader won’t be disappointed if they stay with the book. By the time the chapter three rolls onto the scene, the writing style and story telling are completely engaging.

The manner in which the book is laid out, with chapters covering different aspects of James Garner’s life, helped me not only follow the telling of this life story but also helped me see how truly diverse the man is.

I found the honesty in the book refreshing right down to those print underware he wore to the hospital. Because Jim has laid out his thoughts in such an open manner within the pages of the book, I almost felt like I knew him…almost but not quite. His shyness does come through. I enjoyed learning how he saw things and because I am older, I can remember many of the people he refers to in the book. This increased my enjoyment of the book.

This is a must read for anyone who is a fan or even just fond of James Garner and a recommended read for everyone else.
Posted by Sunday Smith