Gargoyles of Smoke, Wings and Stone

Writing unique stories with interesting and different characters is not an easy task for most aspiring writers. Take the children's storybook for instance. How do we find a character that the child will love, indeed treasure, so much that it ends up being the captain of its own fate? And how do we find one that has never been used before? It can't be a mouse because Mickey has that role, along with some of his lesser cousins. Mrs. Potter took rabbit off the table. Spiders? Charlotte will occupy that space in the hearts of children for a long time to come. Babe took the pig, though there are others. Ducks? Hens? Horses? Dogs? Coming in with a unique character is hard especially when it has been done before. 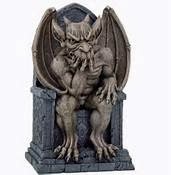 The world of paranormal writing is barren with little for a new writer to glean, particularly when trying to find a new but familiar face. As writers search for that one special character or species, they have gone farther and farther afield, harvesting not just vampires, werewolves, and the succubus but also the gods of mythology and the terrors of our nightmares. While each story is unique in its setup, character details, and world rules, there is little out there that hasn't been done in one way or another. Yet have you ever seen a story about gargoyles, one where the focus was not only on the gargoyles but gargoyles as the good guys? Somehow Marijon Braden has managed to be unique in a field stocked full of 'already been done' characters with her book Smoke, Wings, and Stone, bringing to life a new breed of heroes. 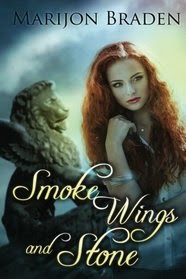 About the Book:
The two sisters, Carrie and Sara, tell parts of this story as seen through their own eyes. Both are completely different, with Carrie being the tomboy athletic one and Sara being the creative spoiled one, and it shows within their narrative. No matter their differences, they are close as only sisters can be - fighting over space and trivialities one minute and then having each other's back the next minute. It is this kind of relationship that lands them in a dangerous world unknown to them and to most humans.
One night ,while working a wedding reception at the Country Club Ballroom, Carrie spots a young man who appears drunk. She stops to chat with him, discovering he has crashed the wedding reception. Then he says he found his wife at the reception, "So, his wife was a guest," Carrie thought. The only problem is, when Carrie asked him to point his wife out, he pointed to her sister, Sara. Luc, a self proclaimed Prince, said he simply hadn't asked Sara yet but she is his destiny.
Carrie enlists Sara's help to get Luc out of the banquet hall so there will be no trouble with the management though, in part, she thinks it funny this Prince Luc has a crush on Sara. Getting Luc out was no problem. Getting away from Luc, who intended to walk them home, is. Before he will leave he makes Sara take a vow. She speaks the words he asks her to simply to get rid of him. Little did Sara or Carrie know the impact of those words.
Sara, through her offhanded vow, is now betrothed to Luc, the prince of a vast gargoyle family, the Family Gargouille. Not only is the vow taken seriously by the Familly but it has placed Sara and all those she love's in serious danger.
There is a war brewing, a war between the vampires and the gargoyles. The only thing keeping it from happening is a truce set up between the Family Gargouille and one of the largest, most powerful vampire clans. The renegade vampires wishing to see the war begin, will stop at nothing short of being the actual first fist thrown in this struggle. If they can force Luc's family to react by kidnapping Sara BEFORE she becomes Luc's wife, the war will be on the Family Gargouille's head. Between trying to keep Sara safe from attacking vampires while preserving the pact and trying to get her to agree to fulfill her vow to him, Luc is completely overwhelmed.

My Take:
The use of Gargoyles in this story is a good choice. One of the problems I have with the Twilight series is the main male character is almost 100 years old. What could he possibly see in a teenage girl? No matter what his body looks like, his experiences would have made him older and much wiser than nineteen. Braden avoids this pitfall successfully since her main character, though quite old, hasn't had the experiences because he has been asleep as a stone gargoyle. It also explains his old world charm, grace and sensibilities. I loved the idea that the Gargoyles sleep as stone for long periods of time.
This story is relayed to the reader through the voices of both sisters. There was no confusion between the two as the voices were completely different. I was much more invested in Carrie, I suppose because she seems more like me. I loved her best friend Kevin. Luc, however, never really came through for me. He was distant but he is distant within the story as well, as if his life requires him to keep everything and everyone at arms length, even the girl he loves. Braden does a good job of giving her characters differences that keeps them separate within the mind of the reader. It makes for a more realistic story.
Some will find the setup too long. I am not the person who requires a murder on the first page to get my interest but this book would have been better served if the first 30 pages had been halved. It is a great talent to give the setup and descriptions within the text of the story. Making words count in this way takes much practice and a strong sense in how to make each word do double duty. Still, even with the long setup, I enjoyed the story itself.
The only other thing keeping this book in the middle range is the lack of consistency when it came to the rules of the pact. When can a gargoyle take action and when could they not take action? There seemed to be a lot of crossing the line and a lot more of refusing to even approach the line. In one scene, the gargoyles kill vampires, in another scene they won't even touch them to save Sara from being kidnapped. This was quite confusing, leading me to ponder their reasons instead of enjoying the story.

My Recommendation: I liked the story. People looking for something a little different in the paranormal reading world may find this one to their liking. It is a chaste read and though there is killing afoot, I feel it is suitable for preteens to adults. It is a pleasant YA book with good characterizations.