It has been awhile since we've done an author interview. Today we are welcoming Karla Tipton, author of the Dangerous Reflections, a time travel mystery involving a modern-day college graduate student, who stumbles into a world of magic mirrors, evil wizards, and English alchemy and discovers love along the way.

Set in in present-day Pennsylvania and Edwardian London, Dangerous Reflections tells the story of Martie Harris, a university graduate student in psychology who inherits a magic wand and seeks to solve a mystery left in a letter by her dying grandmother. With the help of her former Ph.D. advisor, the dark wizard Marcus Cirksena, Martie time travels through the aid of magic and mirrors to London in 1910, where she attempts to save her grandmother by stealing the Philosopher’s Stone and its life-giving elixir from a handsome wizard named Alastor. 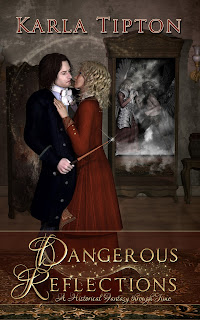 A fast-paced romantic adventure packed with alchemy, illusion and family secrets, Dangerous Reflections explores relationships and illustrates how our perception of others changes what we see, and ultimately feel, about them. The novel builds around a number of intriguing characters, whose motives are slowly revealed against the turbulent setting of magic and mysticism in turn-of-the-century England. Tipton develops a story notable for its dramatic descriptions and finely nuanced atmosphere and surrounds the reader in the world she has created, keeping the tension perfectly balanced all the way to the novel’s climactic finish.Dangerous Reflections 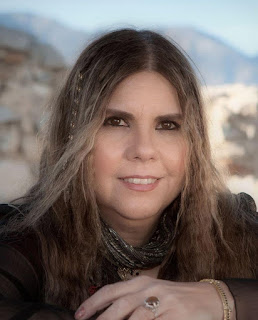 “I cut my literary teeth on gothic romances, Edgar Allan Poe, and the daytime vampire soap, Dark Shadows,” said Tipton.  “Long before there were sparkly vampires roaming through the cultural consciousness, I wrote about feisty modern women time traveling through history and falling in love with powerful men of myth and magic. Genre-bending has always come naturally to me; I enjoy shamelessly mixing it up, blending history, paranormal, time travel, fantasy and mystery into my novels.”

Thank you for dropping by for this interview. I just love time travel books and I am sure many of my readers will be interested in seeing something new and something old they may have missed.

Friends, Karla Tipton has two time travel books that should be of interest: Dangerous Reflections and Rings of Passage.  But I know you are here to read the interview so on with it.

First,  Dangerous Reflections is an Edwardian London-based story about a graduate student who travels through time to help save her dying grandmother. What inspired you to write a time travel book that features mystery and magic?

I’ve always written stories with time travel and paranormal elements since elementary school. The time travel element was most likely inspired by watching the gothic TV soap, Dark Shadows, and Christopher Lee vampire movies. My mother handed me a collection of Edgar Allen Poe short stories when I was about 10. She hoped I would learn the dangers of keeping secrets from The Tale-Tell Heart. But what really caught my attention was the plot device of having a dismembered murder victim buried under the floorboards.

Dangerous Reflections came about after I discovered the Harry Potter books in the early 2000s, when J.K. Rowling was still writing book 5 out of 7. Losing myself in “Potterverse” helped me escape my day-to-day life, inspired my hope, and stirred my creative imagination. I began writing fan fiction based in that world, and when my stories earned over a thousand positive reviews on a fanfic website, I decided to develop a magical world of my own. Whereas Rowling’s magic world was entirely imaginary, mine is set against the backdrop of history.

I remember running home from school so that I could catch Dark Shadows.  The only soap I ever watched. Love, loved it. I was a fan of Poe as well and the Tale Tell Heart was one of the best.


Your first novel, Rings of Passage, is also a time-travel novel about King Richard III. How did writing that novel contribute to the story in Dangerous Reflections?

I wrote Rings of Passage, which features Richard III as the romantic hero, about 20 years ago. In the mid-1990s, Rings of Passage was agented and pitched to New York publishing houses, but at that time, romance publishers weren’t interested in books that blended romance, time travel, fantasy and history all in one. When Richard III’s skeleton was excavated from under a parking lot in England in 2012, I dusted off my novel, updated it, and sold it to a small e-publisher, LazyDay. It seemed miraculous to me that the medieval king I had written a novel about so long ago was suddenly all over the news. Richard’s reburial in Leicester Cathedral was scheduled for March 26, 2015.

Although the magical conventions are different in Rings of Passage and Dangerous Reflections, there are definitely similarities. Themes that always seem to appear in my novels are that soul mates do exist and that destiny can be altered if the love is strong enough.

Another similarity between my two novels is my incorporation of the Philosopher’s Stone, a magical substance produced by alchemists, who were ancient sorcerer-scientists. In Rings of Passage, the magical rings are made of it. In Dangerous Reflections, it’s the substance the heroine seeks to heal her sick grandmother and father.

What other background and experience do you have as a writer that led to you trying your hand as a novelist?

I began writing fiction at about age 9. I was inspired by paranormal stories early on, and one of my first short stories was about zombies created by voodoo. I continued to write fiction, but became involved in the rock music scene as a listener, bedroom musician, and observer of trends. I enjoyed the writing styles of rock journalists such as Lester Bangs, and decided I wanted to write about the music. I joined my high school newspaper so I could publish my rock concert reviews, and went to college for a journalism degree. After graduating from Kent State University in Ohio, I took a job at the Antelope Valley Press in California. In addition to writing historical feature articles about the local area and residents, I continued developing my rock journalism chops by interviewing musicians and reviewing albums and concerts that took place in nearby Los Angeles. Many of my articles are posted on my website.

So you went out and got the education to support your passion. I find many good writers have written since they were quite young. Sometimes I think that if you are born to write , you write no matter what. It is always nice when people back up the passion with education.

There are strong elements of romance in both of your novels. How did you develop the male love interests’ characters and are they based on any individuals that you know personally?

The male love interests in my stories truly are built upon my imagination and my ideal dream lovers, not on any real person or relationship I’ve ever had. Don’t I wish! I do like antiheroes, and both male leads are haunted by darkness and self-loathing within. They are curmudgeonly bad boys with hearts of gold. It’s a favorite archetype of mine. I also like dark-haired English guys with long noses. Go figure.

I think most of us like a little bad boy in our good men.

What do you find the most fascinating about the fantasy, historical, romance, and time-travel genres?

It’s the blending of the fantasy, historical, romance and time travel genres that I enjoy most. I “genre-bend” without even trying. Writing a formula romance? Now that’s hard. Really hard.

When writing romance, it’s developing the relationship dynamics between two characters that is the most gratifying for me. When life throws them a curve ball, or they find themselves in incredible circumstances, or under extreme pressure, I like to see the extreme lengths of courage and strength they can muster.

Sounds like your characters lead the story.  I have found the best writers, at least the ones I like, let the characters show the story, reveling their true nature as the story unfolds.

What would you like readers to remember about you and your books?

I want readers to be moved by my themes of sacrificing for love, and how trust between lovers is hard won but easily lost through betrayal, or perceived betrayal. There’s the idea in all my novels that soul mates might be destined for each other, but not necessarily destined to be together. The world is a harsh place, and external forces can keep two lovers separated no matter how right they might be for one another.

I also want readers to be so gripped by the plot twists and cliffhangers in my novels that they stay up too late, totally engrossed, and are sleepy all the next day at work, but never doubt that it was totally worth it.

Yes, those are the books we remember for years, aren't they.

Are you working on a new novel and, if so, what can you tell us about it?

I’m working on a novel called Potionality Crisis. It’s a modern day tale and does not involve time travel. The story revolves around two scientists: the hero, Silas, is a curmudgeonly yet sexy university professor and chemist renowned for developing natural healing compounds, of which the patents are sold to fund the university. The heroine Ellie is his graduate student assistant with a secret: Her mother is a witch and Ellie, too, practices magic. Ellie’s professional aspiration is to merge magical methods of healing with the hard scientific techniques that Silas is famous for. But Silas has a secret, too – one that he is not even aware of himself.

That sounds intriguing. We will have to keep an eye out for it.

Thank you again for stopping by. I'm looking forward to more books from you.

Readers, be sure to try out one of these lovely books.