Reading books set in different places and by authors from other countries allows the reader to experience language and slang that is wholly new. Even if your native language lies within the covers of those books and the author speaks her native English, new ways of speech and idioms pop out.  I enjoyed this about Maggie Tideswell's novella - the little language surprises.  Tideswell's tight and colorful writing creates an air of being in South Africa.

Most of my readers know that I don't read Romance or Erotica but if you do, take a peek at The Run-Away Couple. There is more than one surprise in this sweet tale. And there is plenty of passion, ghosts, and scary passages for everyone.


A snippet for you:

Lightning flashed through the tiny leaded windows, followed a few moments later by rumbling thunder. That musty, earthy smell of old buildings hung in the air. That must be what the inside of a grave smelled like. Goosebumps covered Piper's arms. There was no railing, leaving a pit around which the stairs curved. Piper leaned against the stone wall until the wave of nausea eased. It was eerily quiet. Piper heard slow footsteps on the stairs below her. Somebody real was in the stairwell with her. Piper ran up the last few steps to her floor. About to rush for her door, she staggered half a step back when it creaked open and a woman came out of her room. The woman had a basket in one hand like a chambermaid but cleaning rooms at this time of night? The woman wore a long black cloak, the hoody of which had been pulled up over her hair and face. Who was she? "Hello, can I help you?" Piper said. The woman partially turned her head and peered at Piper past the hoody with a very clear blue eye. When she heard something behind her, Piper spun around and screamed.

It started with a Gothic themed wedding in a lodge in the middle of nowhere. The bride couldn’t have foreseen the far-reaching influence her special day was to have on the people in her life. Bridesmaids, Weddings & Honeymoons is a five book series
The Run-Away Couple 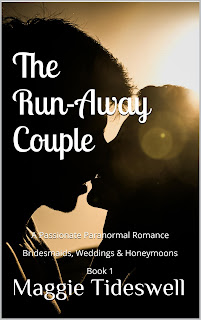 It is said that the maid of honor and the best man are the most likely to have sex on the wedding night. Add a love-hate relationship and throw a couple of ghosts into the mix, and you have the Run-Away Couple.

Eloise chose a Gothic themed wedding for her and Dane, complete with remote setting, flickering candles, flaming torches and shadows, all geared towards scaring the guests. The stormy weather and swirling mists were a bonus.

But the person most scared was the maid of honor, the bride’s elder sister, Piper. She didn’t do creep. And she had been lumped together for the night of the wedding with Marcus, the best man and the bane of Piper’s teenage life.

He was a prankster of renown when they were growing up. As the boy next door, he singled Piper out for the best he could come up with. She didn’t trust him then and she didn’t trust him now. As the run-away couple, would they follow the traditional path? Or would Piper’s dislike and mistrust of Marcus win out? 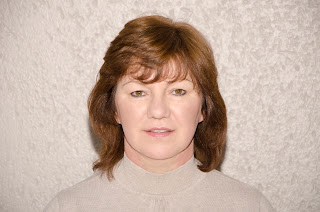 Maggie Tideswell, born in South Africa writes from a South African perspective. She lives in Johannesburg with her husband, Gareth and their three cats. When asked why she writes in the paranormal, her answer was that paranormal, things unexplained, is all around us, whether we acknowledge it or not. And romance is everywhere too. It is love, not money, that makes the world go round.
Follow Maggie on Twitter:  https://twitter.com/LunaMags
Follow Maggie’s Wonderful Words blog: http://maggietideswell.blogspot.co.za/