Did you ever know something, just know something when there was really no way for you to know? Have you ever answered a question you thought you heard only to find out the question was never spoken aloud? For some people these sorts of things happen all the time but for others it never happens. Is it just that we tend to remember when we are 'right' and not when we are wrong or is it something more? What would happen if a government group took advantage of people who seem to have this special ability and how would they go about solving crimes?
Curious? I was too, so I read Divine Intervention by Cheryl Kaye Tardif. Her take on the way certain abilities might be used in criminal investigations and what limitation such abilities might have was fascinating.


From the back cover: 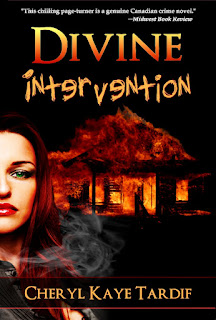 Jasi and her team members―Psychometric Empath and profiler Ben Roberts and Victim Empath Natassia Prushenko―are joined by Brandon Walsh, the handsome but skeptical Chief of Arson Investigations. In a manhunt that takes them from Vancouver to Kelowna, Penticton and Victoria, they are led down a twisting path of sinister secrets.
Sifting through ashes and clues, Jasi realizes that there is more to the third victim than meets the eye. Perhaps not all of the victims were that innocent. The hunt intensifies when she learns that someone they know is next on the arsonist's list.
Unleashing her gift as a Pyro-Psychic, Jasi is compelled toward smoldering ashes and enters the killer's mind―a mind bent on destruction and revenge. And in the heat of early summer, Jasi discovers that a murderer lies in wait…much closer than she ever imagined.

About the book:
Jasi is awakened by an early call requesting her to come in from her long needed vacation and join her team on an arson investigation that has just proven to be part of what appears to be a serial crime. Her team, using their psychic abilities, investigates two arsons months and miles apart. Beginning with the fiery death of a doctor that eventually links back to the woman and child who were killed in the first fire, Jasi and her team discover secrets that not only the doctor had but also secrets that so many around him have. The team learns how limiting their abilities are and how much old fashion police work must be done to catch the arsonist.
When Jasi comes upon the scene where the doctor was found she meets Brandon Walsh who she thinks is just another interfering Arson Investigator. Most AI's don't understand the gifts that Jasi and her team bring to the investigations and normally, since her team is from a federal level agency, she doesn't have to worry about the local Arson Investigators. Imagine her surprise and dismay when she finds she must work with Walsh on this entire investigation. It doesn't help that she is attracted to him and he to her.

My Take:
I really enjoyed the very first part of the book and got into the characters immediately. I was a bit hesitant when the team reached the first arson scene because the author created a feeling that both women on the team felt all men were sexual predators or at least pigs. When Jasi met Walsh, I got the distinct feeling this book would turn into a heart throb Romance. It does not. Not that there isn't sexual tension, there is. But the story carries the day similar to, say, the television show Castle.
The way the author weaved clues to the real arsonist's identity was like a tangled ball of yarn. Just when you think you have finally got the story straight and know how the players fit together, you come to a knot of conflict, proving you haven't figured out the arson story completely. Each clue leads you to another strand to follow but eventually, after continually plucking and picking at each thread, you find they all are part of one complete string pointing directly to the killer. What can be more fun than running down clues, trying to solve the crime before our heros do? While I was able to figure out the killer sooner than I think the author intended, the story was still quite enjoyable. Taking the book at several readings might have contributed to my digesting the clues. If you read the book straight through, you may be surprised by the killer.
I especially enjoyed watching how the psychic abilities aided the investigation but didn't solve the crime. No, good old fashion detective work solved the crime but with the clues the psychic abilities uncovered. In fact, sometimes the psychic clues lead to more questions than answers.

I highly recommend this book to anyone who is interested in detective, thriller books, especially one with a psychic twist.