A Journey into Hell: "Chasing the Cyclone" 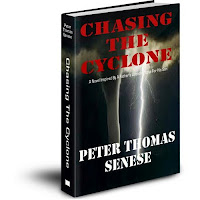 What would any of us do in a situation that's straight out of our worst nightmares? Your eight year old has been kidnapped by your spouse, taken out of reach, hidden from you. Every time you come close to finding her, she's gone again, further and further away. Who would you call to help? How would you go about trying to find them? In this ever-shrinking world, how many places could he be taken? This novel, inspired by an event in the author's own life, explores the startling landscape of the world in which “chasing parents” must live. It's a world that bears a definite resemblance to hell.

Judges and other authorities are often enmeshed in a difficult web of personal animosities between parents whenever there are child custody issues, with accusations of misconduct of all kinds thrown around, legal maneuvering by lawyers exclusively serving the interests of their clients, where flaring tempers and acting out are not uncommon, but this is an entirely new level of complexity.

Courts making assumptions with only a fraction of the facts, laws that trap parents in jurisdictional gotchas that limit a chasing parent's ability to find a missing child, countries unwilling to help authorities track down parents who kidnap their children, countries with lively markets actually selling young children into sexual slavery – all of these are threats to the sanity of a parent left behind, and all become very vivid realities to the reader, as “Chasing the Cyclone” unfolds. Paul's friends (and we all wish we had such friends) drop everything to help.  Jim Eastern, a retired Royal Canadian Mounted Police officer with overtones of James Bond, and Ben, a colorful 73-yr transplant from Australia, join the search and apply their considerable skills to the task, but the task is humongous.

The reader is dropped into a world where nothing is as it should be or even as it seems to be. The sands of circumstance keep shifting again and again, financial resources are drained as Paul and his friends travel from city to city, and even country to country, hiring added folks to help with the search,  Paul paying whatever it takes and counting his blessings that he has it to pay. All the while Paul must try to handle all of it for the sake of finding his child, and ensuring that Alex is not harmed, either physically, or mentally, in the process. And to add insult to injury, he knows that Alex must not be taught to hate the mother who kidnapped him.

This book is a fast thrill ride, nearly impossible to put down (I read it in one sitting, and have the undone projects to prove it...grin). The way Senese manages to get the reader into the head of Paul Francesco, a complex place where a mix of frustration, anxiety, anger, fear, and a host of other feelings struggle for priority, is quite remarkable. We “get” that feeling of “Oh, my God, what NOW!!” that chasing parents feel all the time.  And through it all we feel the ever-present focus on Alex, and the unswerving devotion that drives Paul's search for the son he loves.

Peter Senese has given the rest of us the opportunity to “walk a mile in someone else's shoes” and see the struggle of chasing parents, all the while giving us the dynamic, team-against-all-odds excitement of a spy thriller, swat-team-style action, the clue-following of a mystery novel and an incredible amount of suspense that keeps us anxiously turning the pages. I doubt that anyone who has read this book will ever see an Amber alert again without wondering if there is a chasing parent out there about to go through personal hell.

Put this one at the top of your fiction list. You won' t regret it.
Posted by Eva Kosinski (Gabriella Wheeler)