For some time now I've been searching out other blogs, particularly book review blogs.  Some are quite humorous with brilliant prose, some are humorous with poignant prose and themes, and others just short, sharp, get in and out.  One thing I noticed is the blogs I like best have only the writer's words. To that end, I have decided not to include book descriptions from Amazon, B&N, or other sources.  After all, the links are there if the reader cares to look.
The other thing I noticed is how the words flow together - which brings us to how the words in books are put together,  particularly in descriptions or the use of similes.  Some authors tend toward images that sew seamlessly into the story.  Others jackhammer images into your brain with huge earphones, pounding head splitting, abrasive music blow by blow until you lose the line of the story trying to sort out the image (if you see what I mean) and it can ruin a good story. 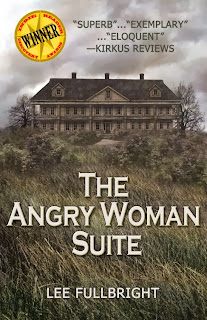 Lee Fullbright's "The Angry Woman Suite", has images that settle on the reader like a soft, silk scarf. The reader hardly notices them but they add tremendous style and beauty. Many of those images stay long after the book is finished. There exists a gentle flow in good writing. "The Angry Woman Suite" has it while many 'good stories', even ones I love, do not, making it exceptional. This eloquent tale has received multiple awards and rightly so.

Francis Grayson spent his childhood in a rundown mansion near a small town in Pennsylvania, living with his mother, grandmother, two aunts and older brother. From the beginning of his life, he was a marked child, a reminder of sin and loss, making him the target of the women in his household.  He grows up with a bitterness tempered by his desire to fix whatever is wrong with these women. This bitterness and desire clings to him even as he marries and works to raise two girls.

The Angry Woman Suite is not just about Francis growing up in an abusive home and how it affected others around him.
Frankenstein as written by Mary Shelley could be described as a man, Dr. Frankenstein, who created a monster using parts of the dead, only to have the monster haunt him (and he the monster) throughout his life.  But that description leaves out the subtleness of the monster's gentleness turned to horrid revenge spurred by loneliness. It leaves out the  deep debate Dr. Frankenstein plunged through with himself. Similarly, there is an ocean more to The Angry Woman Suite then the simple descriptions I have found on other sites and at Amazon.
This is a story about murder, mystery, blame, death, and abuse told by three different narrators through a series of diary type book entries. It begins with the diary of Elsye, describing her childhood starting at the age of five. Her grandfather is her world and remains so to the end. The next diary entry we read belongs to Francis, a man who becomes Elsye's stepfather. Next up is an excerpt from the diary of Aidan, mentor of Francis. Excerpts from these works are pulled together to tell the tale of three generations, showing how abuse can tumble from one generation. How one lie (the truth about Jamie) can ruin not one life briefly but multiple lives, deeply and irreversibly. How other lies, deceit, and jealousy can affect those not even involved.
The story, being told from three different viewpoints, each from a different generation, tends to move through time, in and out of different eras. Like a movie with a series of flashbacks, the reader must pay attention to who is talking about when.

Fullbright uses the English language to the fullest without drowning her readers in words, forced images, or meaningless clues. The story draws the picture of the murders subtly, explains the abuse slowly,(why did Lothian, a grown woman, bite on Francis like she did?), and only drops hints about the murders and what happened to Bean until they actually take place.
Of the main characters, I could not like any of them. Some of the minor characters got my sympathy for moments. I did empathize with Elsye to a point, knowing she had two lives - before Francis and after Francis. Francis was one I could sympathize with; he never had a chance from day one. Aidan was just a selfish, blind to the world around him, idiot whose silence and outright lies hurt the very people he professed to love.  Fullbright, however, draws these characters quite well, exposing their motivations for everyone to clearly see. While the story is told from three viewpoints, the characters are different enough to keep the voices separated until the two entries before the last. At that point Aidan and Elsye confused me with similar speaking cadence and style.
I found the book fascinating, maybe for the insight into the effect of abuse, but also for it's beauty of language. The murders took a backseat because it took so long for Fullbright to actually tell us about them. While a niggling problem in the back of my head, it didn't take away the other, positive attributes of the story.

This is a well written story with an intricate storyline, good for readers who enjoy literary fiction containing caverns of deep introspection. I highly recommend this work to those readers. If you are looking for a throw-away book such as the Stephanie Plum series or an action packed space opera, this is not the book for you.  But if you enjoyed books like Frankenstein, Wuthering Heights, or A Work in Progress, you are sure to enjoy this.