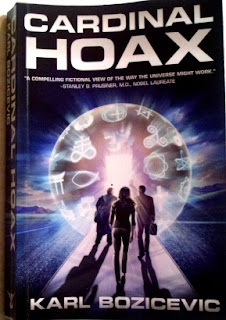 Those stories that stay with us year after year are about the places we can't get to yet; they get looked at again and again by different authors, expanding and developing our understanding of the devices and the technologies behind them, and, I would maintain, expanding our understanding of ourselves. Time travel stories, robot stories, and life extension technology stories are told and retold, decade after decade, because we haven't quite gotten there yet, and are still wondering what will happen.

Karl Bozicevic has taken on some of humanity's most daunting issues, especially as a new author, but it's clear he's been thinking about humanity, with its flaws and foibles, for a long time. His gizmo has the capacity to completely change how people do just about everything, including how they think about life the universe and everything, but he also manages, in explaining what Herbert's invention is and what it does, to teach a fair bit of physics along the way, avoiding the textbook approach, for which I am profoundly grateful.

In the book, the Cardinal Hoax is the vehicle for introducing the new invention. Before the word “hackers” took on its current security risk meaning, “hackers” meant folks with a sharp wit, a penchant for complicated practical jokes, and the intelligence to create extraordinarily dazzling pranks and hoaxes. Computers came later. The Hackers from MIT were real and renowned in their day for pulling off “impossible” stunts against all odds. Herbert, as one of their number, continues the tradition in ways likely to startle even that jaded bunch.

Herbert is the type of character well known to most academics and technical professionals, and a staple of hard science fiction. He is the archetype of the the brilliant, socially-awkward scientist, driven by concepts beyond the everyday, who just can't stop asking questions and trying to answer them, with a really quirky sense of humor other people just can't “get.” These severely techie folks tend to need “keepers” to remind them of appointments, to be sure they do the paperwork, and sometimes even to remind them to eat. His most constant companion is his dog, and even he can't always be relied upon to behave. I still have some confusion as to whether choppy dialogue early in the story is meant to underline Herbert's lagging social skills, or just happenstance that needs to be more closely looked at to make it flow better, but generally the writing is good. There aren't many places where the reader stops and scratches his head, because something didn't flow right, although there are a couple minor ones.

Korin is the Dagney Taggart archetype (think Atlas Shrugged), tough, competent, fearless, willing to go after the “next big thing” wherever it takes her. Oscar is the quintessential academic, the anthropologist, trying to make everything fit into a completely sensible whole, in spite of humanity's inherent inconsistency. Alan is the video guru conspiracy theorist trying not to say just what he thinks so he's not labeled as a nut ball. All in all, it's a good mix for a lot of very telling conversations, about who we are, what we believe, and how strangely we react when our most sacred cows are questioned.

There are some folks bound to be seriously offended by some of these conversations. For years, the author Alan Watts (his focus was comparative religion) forced us to look at our belief systems by sort of tipping them over and looking at them from new perspectives. This book does some of that but with a bit more of a heavy hand. Some readers are bound to find this disconcerting, if not positively offensive, so the reader should know that in advance. What it does do, is make us think about what we believe and why, and for many readers, this is a way to focus their thoughts on the distinctions between religion and faith, and how they interact with science, and to see themselves more clearly as a result. This book is dedicated to the process of thinking things through.

A year before the Foundation Trilogy and before many of his prolific number of sci-fi books were written, Isaac Asimov wrote “A Pebble in the Sky” (1950), a book I did not read until well after I'd finished the Foundation series. Amazingly, it was a harbinger of what was to come. Nearly all of the major elements and story lines in the Foundation series were laid out in this one small volume. In all likelihood, none of the people who read it saw more than some fairly straightforward stories that were not as fleshed out as they could have been. How could they know Asimov would spend the rest of his life doing just that? “Cardinal Hoax” has some of that same feel. The concepts are very controversial, the new technology so capable of changing everything, that there are likely to be a great many stories and side-stories yet to come from this work. Whether more stories flow from this author (no pressure, Karl!) is yet to be seen, although it is certainly hinted at when this book ends, and I for one, will be watching for more.