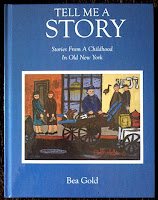 Chinese food was to be had by going to Chinatown.  If you wanted German sausage, you went to the German section of town.  You could pick the chicken you wanted at the butcher's and watch as it was sent to the hereafter.  Things didn't cost much, but not many people had money.   Immigrants had a different view of “stuff.”  Credit was not even on the radar, so if you didn't have something, you saved up for it, did  without it or improvised something close to it that you could afford.

Medical conditions that could be simply taken care of at a clinic today caused deaths, particularly heartbreaking when they were children,  and some things had to be accepted because there was no way to control them.  Because life was harder,  and time to grieve was difficult to come by, it was important to move on, even when children died.  Many had witnessed terrible things before coming to America, and knew they'd moved on before, and those  stories are there as well.

The full-page illustrations are Bea Gold's paintings  They have a haunting quality; the colors are not the pastels and jewel tones of today, but the darker colors of Old Europe, but the warmth in them is palpable. They remind me of that feeling I used to get when my grandfather came in the room (I was very small) with his old fashioned suit and a big cigar.  He was not of my world, and the world he came from was a mystery to me, but I knew it was fascinating.

Bea helps to show some of that world – it is nostalgia for sure, but for a world most of us never got to see.  It brings a better perspective on both the history of the times (relationships with a war on, for example, and the patchwork neighborhoods of New York) as well as a clearer view of the European sensibilities that the immigrants brought with them.  I'd love to see this approach taken for all immigrant groups.  It would really help with gaining an understanding of the roots of other cultures, and the humans that live at the heart of every culture.

Tell Me a Story lets us live in the world of Bea's childhood , where we can see day to day lives unfold in a way that a textbook can't provide.   I'd recommend  this book to anyone, especially those who want to give their children a sense of history, the ability to look deeper into cultures different from their own, and an understanding that life, even a few generations back, was very different from what they know today.