I have been, for the last several weeks, moving my office things from room to room, as I get the new furniture I bought last month. Hopefully, by the middle of next week, I will have an office set up again. In the meantime, books seem to get swallowed by other books - picture the old animation of the little fish being swallowed by a fish that is being swallowed by a bigger fish being swallowed by a yet bigger fish (does anyone but me even remember that?) and you will have an idea of what seems to be happening in my house. I do need to send some of my books away since I don't have time for the new, let alone the old. And as a friend said to me recently, "Books are meant to be READ." I did part with over 600 books last May. I swear I only kept the 1,000 or so books I thought I would use (dictionary, Spanish language) or read again (Ender's Game, Heinlein's work) or read for the first time(Some Clancy, King). The thing is, with this blog and all the wonderful new writers out there, I haven't had time for all the new. How can I ever hope to get to back to the old? Still, I see light at the end of the office moving tunnel, and hope for all the authors who are standing in line for my promised reviews.

.
The fish analogy is appropriate since the first book in this queue is The Twilight Swimmer by A. C. Kavich. This is not a romance, not a paranormal tale, not a mystery, yet it has all three of those elements. An easy, uncomplicated read, with less depth than the first pages might lead the reader to believe but far more complicated than a tale of high school love.

About the Book:
Sixteen year old Brandi is dealing with the death of her older sister, Jenny.  Jenny loved to swim, especially at night, and one night, late, Jenny lost her life. In the depths of the ocean, watching Brandi as she visits the flat rock where her sister was found, is a human-like creature. A creature who swims near the surface of the water only at night. And this creature is fascinated with Brandi. 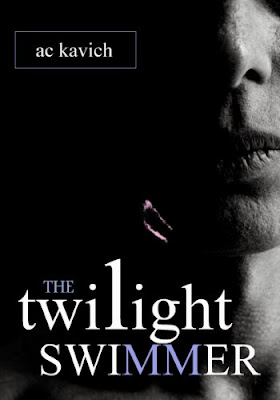 Brandi's grief over her sister  has caused her to drop out of life, barely acknowledging her teachers or homework, almost ignoring her friends, and practically failing her classes. On one trip to the counselor's office she meets Spider, a tall boy with skinny legs who invites her to a party - an invitation only party outside of town. Brandi's whole world changes when a fire breaks out at this party and she comes face to face with a new obsession. Will it save her from her grief or will she go the way of her sister?

My Take
When I first started this book, I was taken by the language and the depth of the narration of the prologue.

"The Swimmer made his home in water so far below the surface that the sun could not penetrate its depth. And yet, despite the blackness, the Swimmer's gray eyes were always watching. His pupils dilated from lid to hairless lid to sort through the woven shadows of the deep.  He could see every alien creature that swam or scuttled by without ever feeling his powerful eyes upon them.
His highly evolved ears were no less remarkable.  He could hear the groaning of tectonic plates. He could hear the steady sound of water flowing through his gill line. He could hear the cells of his respiratory system as they strained to draw tiny quantities of oxygen from the liquid and feed his warm blood. His bones were no less ideal for his environment. He could withstand the intense pressure without discomfort, and his veins could process the nitrogen bubbles that left human divers in peril should they kick for the surface too quickly..."

This sort of prose gave way smoothly to the everyday language of storytelling starting in chapter one. Using this device works extremely well as Kavick spins the tale through Brandi and through the Swimmer. It keeps the reader grounded in the story without the usual, who are we talking about/through now questions that can pop up with a limited omniscient POV.  I felt the intricate prose of The Swimmer's sections of the story gave it and him an 'old world' feel. I loved it.

The best thing about this book is wondering exactly what is going on with the background story of Jenny's death. It hangs in the air, like a faint unidentifiable smell, tainting everything but just out of grasp. I found myself wondering if this was a tale of how Brandi deals with the aftermath of her sister's death, her own feelings, and the reactions of people around her. Do people really expect her to be her sister's replacement or is that Brandi's own delusion, a delusion of needing to be two people- herself and her sister? Is the creature real or just something Brandi's mind has created? Or is this a tale of how Brandi is doomed to follow the same fate as her sister?

There is a twist I didn't see coming.  It is not a slow dawning or a sharp slap, but a sudden dawning. The pieces weren't all there until that point in the story but the pieces click into place over the course of a couple of pages. Then the true tale completes itself.

While I found the book a good read, I did have issues with it being all things and nothing.  The story tended to write too many threads, never quite weaving them tightly enough. We know that Brandi hates her mother but it isn't done to any depth at all. Brandi is dealing with how she perceives people see her after her sister's death but that isn't fleshed out either. But the real jewel of the story is Jenny's death and how it remains hidden in the open. It is interesting how Kavick manages this mystery that wasn't suppose to be a mystery. Kudos for that!

I did connect with the two main characters. I understood Brandi's pain and The Swimmer's sorrow and joy. But I didn't live in the characters. The secondary characters were pretty weak but that did not distract from the overall story. It did leave me wanting for more, though.

My Recommendation:
I found the book quite enjoyable.  Anyone who wants a light YA read with a paranormal aspect, a bit of romance, and a good dose of mystery will enjoy Kavick's tale. The story is clean throughout and suitable for all ages.
Posted by Sunday Smith