Portals in The Space Between

I love good, light hearted reads. Like so many television shows and movies, the stretch from deadly serious to completely slapstick covers a lot of territory. Take cop shows for instance. The road runs from Brooklyn Nine-Nine to Blue Bloods. Somewhere in the middle resides NCIS and NCIS Los Angeles; while closer to Blue Bloods, the humor of those shows keep it lighter. Then we have S.H.I.E.L.D. - lighter still- and Chuck before we get to Brooklyn Nine-Nine. All of these were shows I watched, but for different reasons. Books run this distance as well and if you are in the mood for a middle of the road Science Fiction that has some seriousness coupled with a light touch, I have two for you.  "Queen and Commander" by Janine A. Southard tells a tale of six young people who get their own spaceship and go off to see the universe.  "The Space Between" by Scott J. Robinson relates the story of an invasion of earth and other worlds. All these worlds just happen to be connected by a magical gateway. Both are entertaining reads, well developed and containing interesting settings. Today I will introduce: 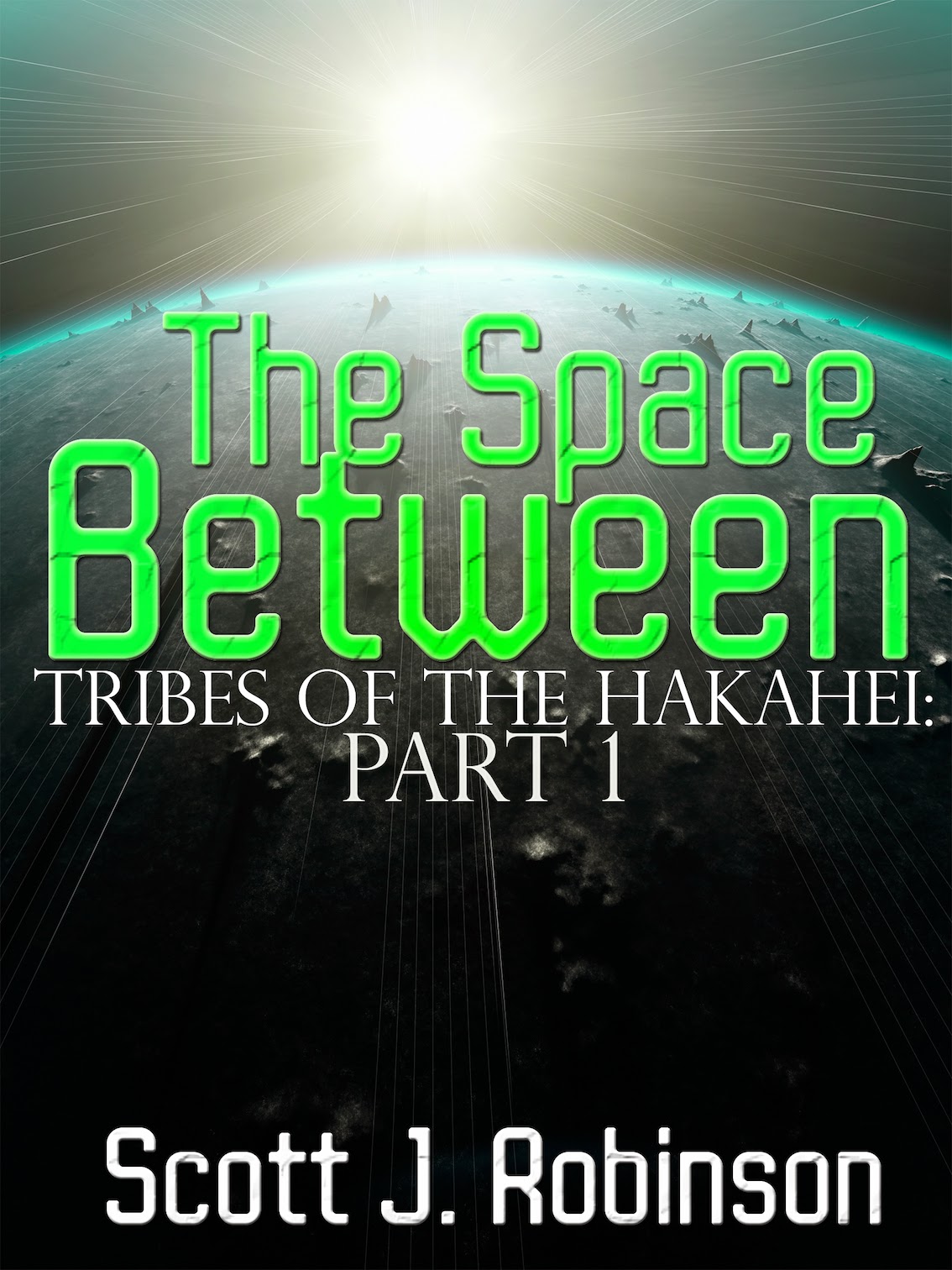 The Space Between (Tribes of Hakahei #1)
Scott J. Robinson
About the Book:
Former Army member Kim McLean has gone to the Robin Hood festival  to meet her friend Nina but Nina is late.  After looking around the fair for a short time, Kim decides to find the Major Oak where Robin Hood stashed his spare food supplies. Here she sat to wait for her friend but nodded off only to awake to strange voices coming from the oak tree.

Here the story breaks to the world of Meledrin.

When a deranged dwarf stumbles into the elfin village, Meledrin, much to her dislike, becomes saddled with his care. Before Keeble can become a true burden, he takes off into the woods and Meledrin has no choice but to follow her charge. As they travel through the woods following the singing only Keeble can hear and feel, strange huge bats fill the skies. These are not ordinary bats; these are bats filled with explosives they drop on the elves. However Keeble has no time for the bats because he has found the tree where the signing magic fills his soul. He chops at the tree creating an escape for Meledrin and himself right into… Kim's world! Their voices are the ones Kim heard upon wakening. Together, they join forces to fight the bats, the aliens they carry and even the U.S. government.

But there is more. Far into the book Robinson introduces Tuki, a moai, whose love has sent him on a dangerous mission to recover a sky glass only to lose him through one of those magical portals right into the arms of the U.S. government. There he meets Kim, Keeble, and Meledrin and becomes part of this little band set on  finding a way to end the war.

My Take:
This is a fun read not just because the story is interesting, the characters are different, or even because the plot is well done. This book is fun because it doesn't take itself too seriously but is written with enough depth that I never forgot the drama, danger, and the displaced characters. Robinson did a splendid job of walking the line between a complete drama and a complete farce. The characters are unique enough that I could always tell them apart, an art in and of itself. Robinson did an especially fine job of creating Tuki and his world, so much so that I felt I was walking in his skin for much of the book whenever he was in the scene. Kim has several layers to her and she unfolds like a rose, petal by petal.   Meledrin tends to be one dimensional, not in a bad way, rather like we expect elves to be, high-minded and aloof. Still, we see shades of what she truly is revealed in the way she treated her significant other and how she came to rescue Keeble. We don't see much depth but that actually completes her character, we see her as the others would see her while we also see her helplessness at times.  Keeble has so much to him and I watched fascinated as he grew throughout the story.

The story takes a break from the Kim, Meledrin, and Keeble tale to introduce Tuki.  I was so engrossed in Tuki and his world that I forgot about the others. When the story resumes, it is with Keeble and his fascinating journey back to Kim and Meledrin.  I was a bit lost when the story picked up again but only for a little while (probably because I wasn't able to read the story straight through). As soon as the characters join up, the story takes another good turn to deepen the plot.

Robinson creates worlds without paragraphs of explanation, letting the worlds unfold to the reader through the action and dialog of each character.  Personally, this is my favorite way of discovering both characters and the world in which they live. Breaking the stream of the story with boulders of description and explanation seems such a waste but it is a great storyteller who can weave enough description through the story to form a complete tapestry for the reader. Robinson does a splendid job.

This is the first of a four part series, so don't expect the complete story here. However, this is not a book that ends in a cliff hanger or in mid scene. And if you are like me, you will look forward to the next book. There were teasers from each of the next three in the back of my Kindle version as well as one for another story.

My Recommendation:
I really liked this book and recommend it to all ages who want a light dramatic Science Fiction with a bit of Fantasy thrown in.  There is nothing in the book that would be inappropriate for anyone over 13 although the banter between Meledrin and her significant  other treads a bit on the border for a younger reader.

NEXT TIME: "Queen and Commander" by Janine A. Southard