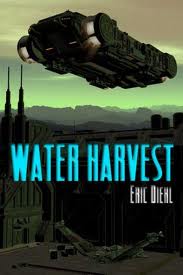 Last spring I was asked to review a book written by Eric Diehl.  As luck would have it, I had two books by Diehl  and ended up doing a review of 24:01 One Minute After instead of Water Harvest! The mistake was very kindly pointed out to me by the author and I promised to do the review as soon as the scheduling permitted. I am so glad I read this book and so wish I had read the other book second; well more on that later.

From Amazon:
The continuous harvest of atmospheric moisture by lunar orbiters foments a plan set in place to destroy the Harvest fleet, but it is derailed by a twist that allows time for development of a technological work-around. Time passes, and the ruling Houses are caught unawares by an invasion intended to wrest control of the Harvest. The interlopers are aided by wizard-like practitioners whose hallucinogen-induced evocations bend the norms of nature to their will.
Cairn, heir to Alar, is taken captive and then dispatched to carry the warlord’s edict. The Maester Viizar, Gezladorn, has his own agenda, contrary to that of the lunar warlord. The Maester is able to manipulate some of the players through mind-control, pitting them one against the other.
Cairn learns of a human-like species that has always kept to itself in the planet’s vast cavern system, and he leads a band of men and UnderWorlders on a subterranean journey to rise into the bowels of House Alar. Alliances fall apart and it becomes unclear who is the true enemy before Alar ultimately triumphs.

About the Book:
Water is a very precious thing, especially when an organism taints what little there is on the planet. After years of trying to develop a way to clean the water, a method is finally developed but too late for some people. This story takes place 1,000 years after those fateful deaths. Even with the new technologies water is still a carefully guarded resource covered by tightly wound rules and laws, especially on the atmosphere harvesting of it.
Cairn, along with Dirc, patrols the upper atmosphere, seeking those who would break the law, but he doesn't understand how far the lunar colonies are willing to go to control the land and water until he is captured.  And when one of the high houses, Trygon, joins forces with the powerhouse lunar colony, all seems almost lost.  And the reasons why Trygon united with the rebels makes little sense except the reader is aware of the Maester Viizar, Gezlandorn, and his followers. Think Obi Wan Kenobi but more powerful.
To make matters worse, the lower house of Lin'dal is attacked and Cairn knows little of what happened to his beloved, princess of that house.

My Take:
I could just see this being made into a movie. There is enough action to keep action fans happy, enough story, plot and fleshed-out characters to keep plot lovers happy, enough mystic happenings to satisfy those fans, with a credible love story to give some sense of urgency without trampling the tale.
Diehl does a great job of developing characters and a story. From minor squabbles between houses to the desperate conflict of the high houses and lunar colonies, everything feels like you might find a similar example in today's world. The exceptional long 'peace' and reign of the higher houses may seem strange by our world's standard, but maybe not so much when considering China. The love interest in the story unfolds in a believable way; not at all like some romance novels where things don't quite represent what happens in real life. Most of all I enjoyed the way Diehl tells the story, from his choice of words and descriptions to the varies intertwining plot points.
This is a blend of science fiction and fantasy, much like Star Wars (though the story is completely different) and as such, one point bothered me over and over.  With all this high tech gear - come on, we're talking flying fighters!- why, oh why, do they use swords in close combat? There was one point in the story I went, "What Total Foolishness",  or some such expression, since you wouldn't catch me giving up my hand gun for a sword. But, as Ben Bova says, "Make one thing unbelievable and the rest consistent." So I give Diehl this point because the book was such a good read.
Now, since I had read 24:01 One Minute After, I was waiting for the shoe to drop, since one of his short stories works into this novel. In some ways this distracted me so I suggest you read this story first because even though the short story was part of a whole group of tales, it stood out enough for me to remember it while I was reading this one almost five months later.

My Recommendation:  I loved this story and the way Diehl spins the tale. Anyone who likes both fantasy and science fiction might well enjoy this artfully created blend.